Claiborne stallions Algorithms, Blame, Flatter, and Runhappy made a splash at the OBS March 2-year-olds in training sale, with several of their juvenile runners bringing impressive, six-figure prices. 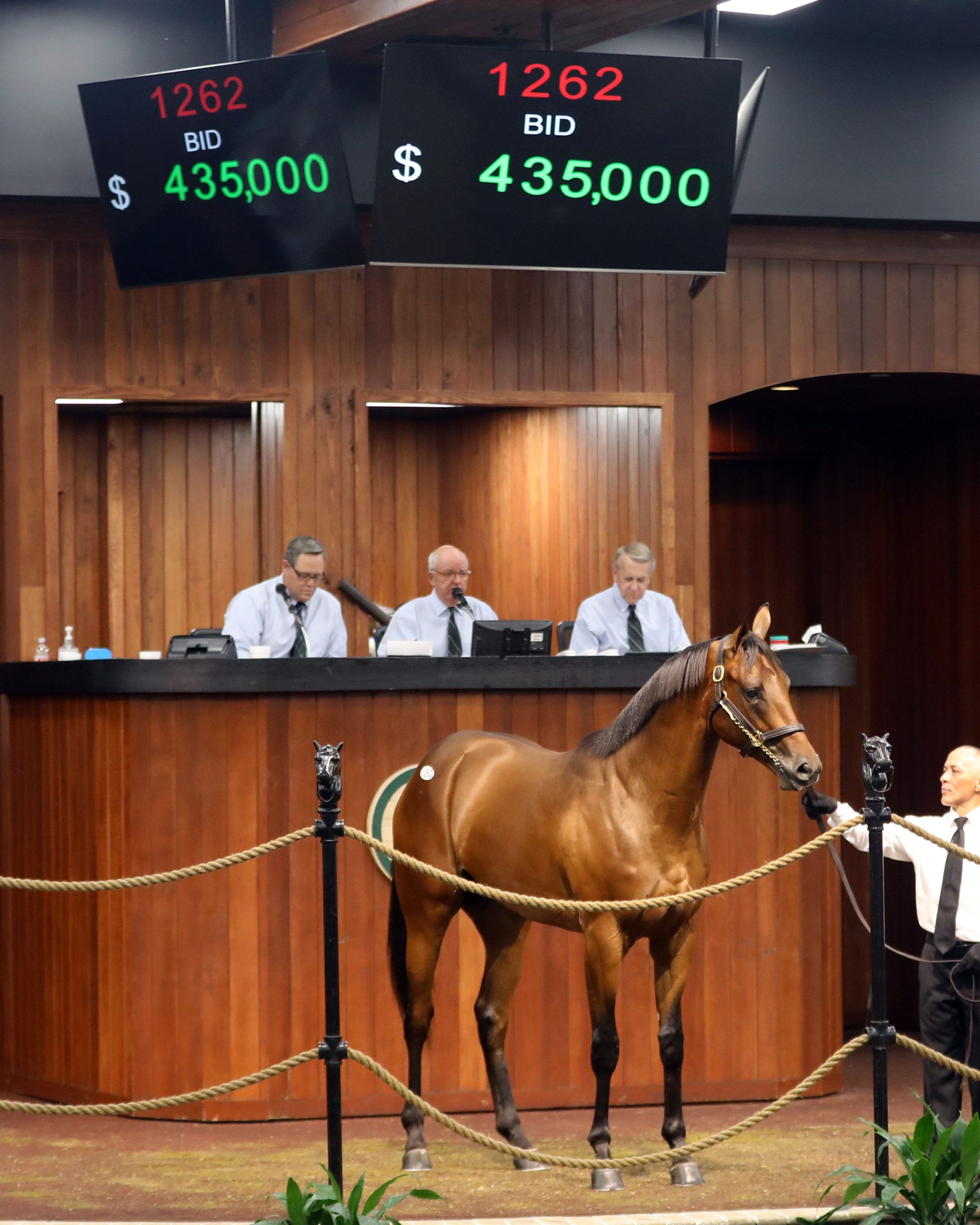 Algorithms’ juvenile daughter out of the mare Water Park breezed two furlongs in :21.3 and was hammered down for $120,000, 24-times the stud fee of the value sire. With a plethora of blacktype runners and blacktype producers under her first and second dam, she was consigned by Gabriel Dixon, agent and was purchased by Cromwell Bloodstock, agent.

Algorithms, an undefeated graded stakes winner by Bernardini, has sired more than 10% stakes horses to starters lifetime from a handful of small crops. He stands for $5,000 at Claiborne.

Blame, an Eclipse champion and three-time G1 winner, had a pair of six-figure juveniles. HIP 149, a colt out of Mommo (breezed two furlongs in 20.4, co-fastest of the day) is from the immediate family of Grade 1 winners Siphonic and Laragh, and was secured by Johnathan Thomas, agent for $225,000 from the consignment of Wavertree Stables. HIP 80, a filly out of the Malibu Moon mare Luna Lover (breezed one furlong in 10 flat) is from the immediate family of Preach, the dam of Pulpit. She was purchased by Castleton Lyons from the Gabriel Dixon consignment for $160,000.

Blame has sired more than 15% stakes horses from seven crops, including five Grade 1 winners. Blame stands for $35,000 at Claiborne.

Flatter had three 2-year-olds sell for six figures, the most expensive of which was a $400,000 colt out of Shananies Song, a full sibling to graded stakes winner and multiple Grade 1-placed Favorable Outcome. He breezed two furlongs in :20.4, the co-fastest of the day, and was bought by J. A. S. from the Tom McCrocklin consignment.

Flatter was also represented by a $310,000 filly out of Winsome Ways (breezed a furlong in 10 flat), who was bought by Hubert Guy Bloodstock from Grassroots Training & Sales; and a $180,000 colt out of Arradoul (worked two furlongs in 21 flat), who was purchased by Cromwell Bloodstock from Ocala Stud’s consignment.

Flatter, who has sired champions West Coast and Avie’s Flatter, stands for $40,000 at Claiborne.

First-crop 2-year-olds by Runhappy were also in demand. HIP 1262, a speedy colt from the Pick View consignment breezed two furlongs in 21 flat. Out of the Mr. Greeley mare Strange Romance, he was purchased for $435,000 by Jerry Durant. HIP 700, a colt from the immediate family of stallions Midshipman and Frosted, breezed an eighth in 10 flat and was purchased for $290,000 by West Bloodstock, Agent for Repole Stable, Inc. from the consignment of de Meric Sales, agent.