The second North American yearling sale of the season sees Claiborne stallions show off some of their blueblooded representatives at the 2021 Fasig-Tipton Saratoga Sale on August 9th and 10th. 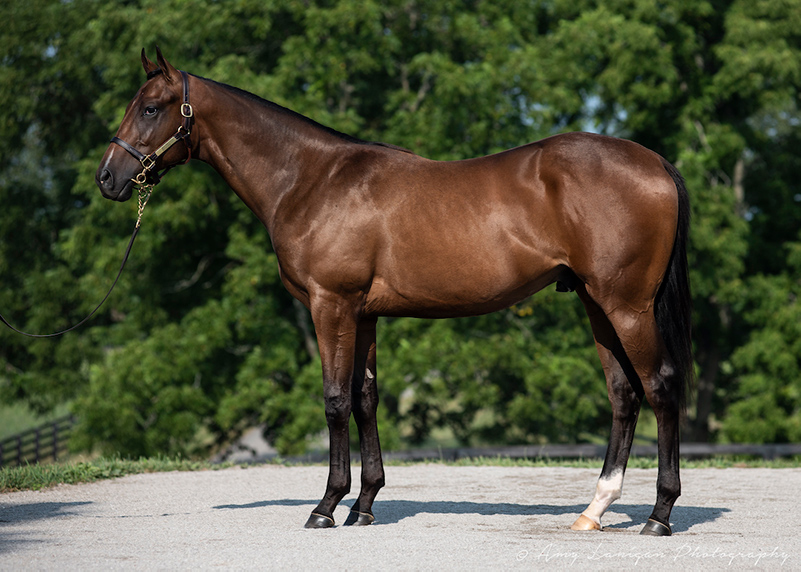 In addition to getting in on the spectacular second crop from MASTERY, buyers will have chances to buy full siblings to proven runners by Claiborne stallions, led by graded stakes winners by BLAME and WAR FRONT.

The colt is bred by Hall of Fame trainer Jonathan Sheppard and is a registered Pennsylvania-bred.

FLATTER is having another successful year on the track and in the sales ring he sees Hip 26 from Denali Stud carrying that momentum to the commercial market.

Hip 26’s third dam is the winning mare Whisper Who Dares, a half-sister to great racemare and broodmare Chris Evert. Whisper Who Dares is also the dam of Grade 1 winner and stakes producer Confessional, stakes winner Gossip, and more.

Claiborne Farm young gun MASTERY is off to a good start at stud with a winner and two other placers and on August 9, his two Saratoga offerings go in the ring back-to-back.

A MASTERY son of Malibu Moon mare Engaged, the colt is named Couple and is a grandson of stakes winner Elope. Couple is also the half-brother to two winners from two to race and sees 15 stakes-placed runners named on his page. Among those are Clark Handicap (G1) winner Leofric, plus Grade 1 winners Telling and Well Chosen.

The sire of 27 seven-figure yearlings, WAR FRONT looks to add to that total with four yearlings cataloged to go through the ring.

His first offering comes 36 hips into the sale when Eaton Sales sends out a well-bred half-brother to stakes winner Mark of Approval as Hip 36. Also Grade 1-placed, Mark Of Approval is one of four stakes horses for Agreeable Miss. Those other three are all by WAR FRONT as well, led by stakes winner Alkaraama with stakes placed King Neptune and Faydhan rounding out the four. Agreeable Miss has six winners from six to run with four of those by WAR FRONT.

Agreeable Miss is out of Grade 2 winner Sweet And Ready, who also produced two stakes placed runners as well.

Sam-Son Farm sends out a filly hailing from their legendary Eye of the Sphynx line as Hip 77.

WAR FRONT’s Hip 117 is a half-brother to top turf runner United, the winner of multiple Grade 2 races over the past few years. Offered by Blake-Albina Thoroughbred Services, the colt is also a half-brother to Grade 3 winner Harlan Punch and a full brother to stakes winner Tensas Punch and Group 3-placed Royal Navy Ship.

WAR FRONT’s final offering goes through the ring late in the sale as Hip 184 for Bedouin Bloodstock.

The 100th Fasig-Tipton Saratoga Sale kicks off at 6:30pm on Monday August 9 and continues the following day at the same time.