It was another banner weekend for Blame, as he was represented by two graded stakes winners. Maraud took the American Turf Stakes presented by Ram Trucks (G2) on Kentucky Derby day at Churchill Downs, while Fault won the Adoration Stakes (G3) one day later at Santa Anita. 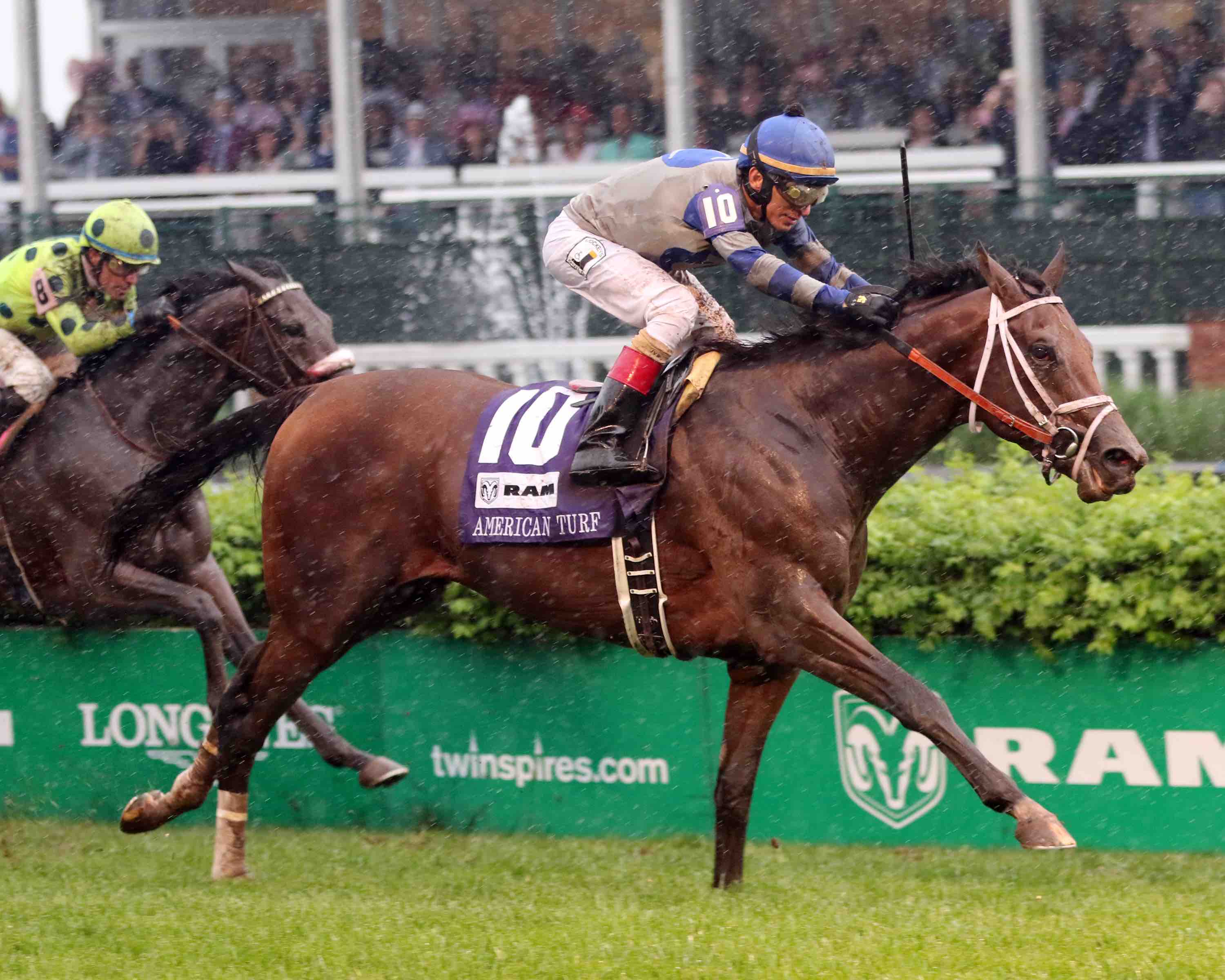 Although record amounts of rain fell at Churchill, it could not keep Maraud from the winner’s circle. The 3-year-old Blame colt surged to the lead at mid-stretch en route to a 1 ½-length victory, while covering the 1 1/16 miles in 1:47.52.

“I didn’t think my horse liked the soft turf,” said winning jockey John Velazquez. “I took a chance, took him back and tried to make one run with him. He showed me something and came through for me.”

Trainer Todd Pletcher also had concerns about the weather but had faith in Maraud, who is now a multiple graded stakes winner.

“It looked like it was holding up pretty well, but it just kept raining and raining,” he said. “At that point, we were already committed to running, and this would be the softest ground he’s been on. I thought Johnny gave him a clever ride.

“We were concerned about the weather, and I’m glad we decided to take a shot. We’ll probably take him back to New York and see what we have there. I’d love to make a race like the Belmont Derby.”

Owned by Treadway Racing Stable, Maraud has won three of his four races this year, including the Palm Beach Stakes (G3) at Gulfstream Park.  Out of the Empire Maker mare Unbridled Empire, Maraud was purchased for $375,000 at the 2017 Fasig-Tipton Midlantic 2-year-olds in training sale.

The following day, Fault was sent off as the heavy favorite in the Adoration Stakes (G3), and she didn’t disappoint. Content to be last early in a field of seven, the 4-year-old Blame filly rallied four-wide turning for home and won going away by a half-length.

“I knew the pace was slow, and the filly wanted to be closer, but I decided to wait,” said winning jockey Geovanni Franco.  “I wanted to try and do what we did last time, which was to swing out and let her make her run.  That’s what she really loves to do, and she made the same run she did last time.  She’s really special.”

Fault, who is trained by Phil D’Amato, got the mile and a sixteenth in 1:44.84 while posting her third consecutive graded win since joining his barn in January. Owned by Agave Racing Stable and Little Red Feather Racing, Fault took the Buena Vista Stakes (G2) in February before notching the biggest victory of her career in the Santa Margarita Stakes (G1) this March.

“A lot of credit has to go to Mark Martinez of Agave Racing,” said Billy Koch of Little Red Feather. “He’s how we got involved with her. He wanted to partner and move the horse out here to California. He contacted us and we jumped at the opportunity to be involved. Phil and his team deserve so much credit, too.”

Fault, who is a perfect three-for-three this year, was bred by Claiborne Farm. She is out of the winning Horse Chestnut mare Charming N Lovable.

Blame is already the sire of 16 stakes horses in 2018, making him the leading sire in North America (with more than 40 starters) by percentage of black type horses. Represented by 17 stakes horses in 2017, including French Classic winner Senga, Blame stands for $12,500 at Claiborne.