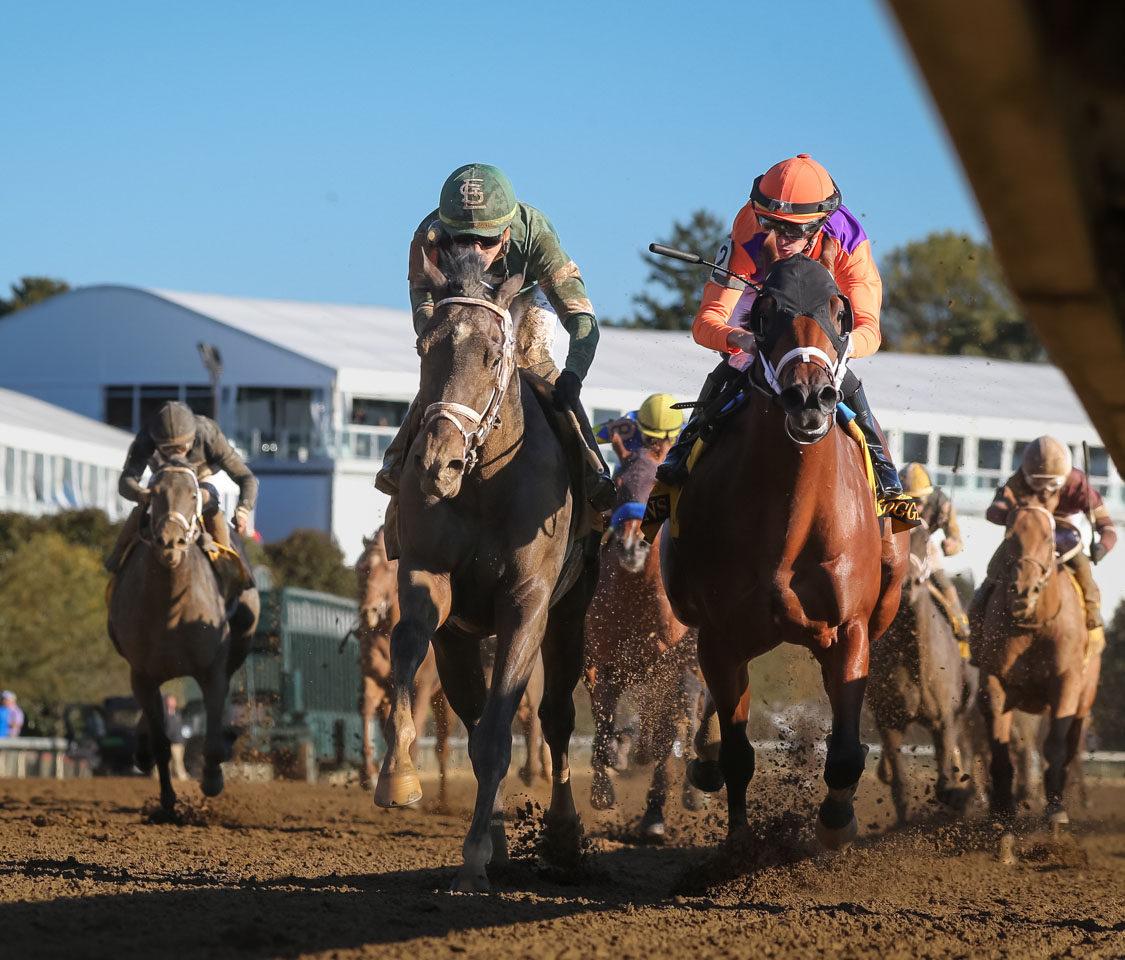 Only a month after winning the Hopeful Stakes (G1) Forte scored a second Grade 1 victory in the Claiborne Breeders’ Futurity after a memorable duel down the stretch with fellow BLAME grandson Loggins. Loggins was only a neck behind Forte in the end with the rest of the field nearly seven lengths between the top two.

Forte is the first runner out of BLAME’s multiple stakes winner Queen Caroline. By Violence, Forte has won two of his three starts and was fourth in the Sanford Stakes (G3) as well. Violence is also the sire of the stakes placed Twelve Volt Man, who is out of a BLAME mare.

Loggins is by Ghostzapper and out of BLAME’s Regret Stakes (G3) winner Beyond Blame.

So far in 2022, BLAME leads the Broodmare Sire list… by percentages in almost every metric, as well as earnings per starter (N. American/European) by over $10,000.

Another successful El Prado line stallion crossed with a BLAME daughter in September was Kitten’s Joy. That stallion’s 3-year-old colt Limited Liability was third in the Virginia Derby (G3) on September 6. A homebred for Stuart Janney, Limited Liability has also been third in two Grade 2s and a Grade 3 in his seven-race career for nearly $250,00 in earnings.

Out of BLAME’s winning daughter Hold Harmless, he is a third generation Janney bred and hails from the family of successful broodmare Meghan’s Joy.

Another line that has found good results with BLAME daughters is the A.P. Indy line. In September that line was responsible for Franklin-Simpson Stakes (G2) winner One Timer, who is by Tapit’s son Trappe Shot.

One Timer has proven to be a successful racehorse in his two seasons of racing with five wins in eight starts. Those victories include four at the stakes level, including two straight as a juvenile.

Untapable Stakes winner Danse Macabre is another who hails from the A.P. Indy line as a daughter of one of that stallion’s grandsons. The filly hasn’t finished worse than third in her five starts, with three of those coming in stakes – a second in the Listed Bolton Landing at Saratoga before the Untapable at Kentucky Downs followed by a third in the Matron Stakes (G3) in October. That Matron Stakes third came just a few hours before Forte and Loggins gave BLAME his Claiborne Breeders’ Futurity (G1) exacta at Keeneland.

Stallions from the sireline of Claiborne’s late DANZIG have also proven to be a hit with BLAME daughters, starting with Sacred.

Exceed and Excel daughter Sacred has been outstandingly consistent throughout her career, starting with a second in the Queen Mary Stakes (G2) at Royal Ascot in her second start. Out of a BLAME half-sister to the great Lady Eli, Group 2 winner Sacred has won or placed in six stakes with her latest win coming in the Listed Dubai Duty Free Cup Stakes on September 16. The filly added another group placing to her resume on October 7 when she finished a good second in the Thoroughbred Industry Employee Awards Challenge Stakes (G2) at Newmarket.

Just a length behind the winner when fifth in this year’s Platinum Jubilee Stakes (G1) at Royal Ascot, she steps back into Group 1 company in the Prix e la Foret (G1) this weekend in France.

WAR FRONT’s European Champion 2-Year-Old Air Force Blue is another from the DANZIG line to cross well with BLAME daughters after his 3-year-old Churchtown finished second in the Toronto Cup the week before Sacred’s win. The gelding has finished in the top two in five of his seven starts for nearly $140,000 in earnings.

Woodbine also proved to be a successful track for another runner out of a BLAME daughter when two weeks after Churchtown’s second Ancient Spirit won the Victorian Queen Stakes. Now undefeated in two starts, juvenile filly Ancient Spirit is by Storm Cat grandson Signature Red.

Worldwide, BLAME is the broodmare sire of 16 stakes performers and 10% stakes winners from the 103 runners out of his daughters. Included in that group are the aforementioned Forte, Sacred, and One Timer in addition to Grade 2 winner Kathleen O and Grade 3 winner Bellharbour Music.

Just like Forte, Bellharbour Music also hails from the Medaglia d’Oro sireline as a son of Mshawish.

The first foals out of BLAME’s daughters hit the track in 2018 and with the numbers increasing every year, there’s no doubt BLAME’s legend as a broodmare sire will continue to grow in the decades to come.