First crop 2-year-old sire Champion BLAME was represented by two new Graded stakes horses at Churchill Downs and Del Mar. NO FAULT OF MINE, making only her second career start, rallied down the stretch to finish runner-up in Churchill’s Golden Rod S.-G2. Next to last after the first half mile in a field of 12 going 1 1/16 miles on the main track, NO FAULT OF MINE swung eight wide on the far turn, made a late bid in deep stretch and was only beaten 1 1/4 lengths for the win, but was more than six lengths in front of the third place filly. In her debut, NO FAULT OF MINE was an impressive 4 1/2-length Maiden Special Weight winner going seven furlongs on the all weather surface at Arlington Park. The Lothenbach Stables homebred is trained by Chris Block. 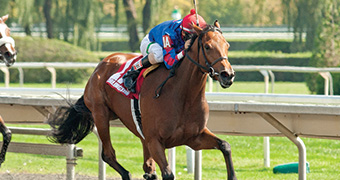 DON’T BLAME ME, also a filly, closed down the lane to place in Del Mar’s Jimmy Durante S.-G3 at a mile on the famed turf course. Still 10th after the first six furlongs in this field of 11,DON’T BLAME ME went four wide into the stretch and rallied between rivals to finish just a length back of the win. Back in September, DON’T BLAME ME went wire to wire to win a one mile Maiden Special Weight on the main dirt track at Santa Anita by an impressive 5 3/4 lengths, getting the distance in a quick 1:35 3/5. She is owned by Alan S. Kline & American Equistock Racing Inc. and trained by Kristin Mulhall.