Claiborne’s newest addition to the stallion roster, BLAME, was named 2010 Champion Older Male at the Eclipse Awards for his tremendous 4-year-old season. The title was a unanimous selection for the son of ARCH, who defeated other finalists Quality Road and Richard’s Kid. It was the only unanimous vote of the night. 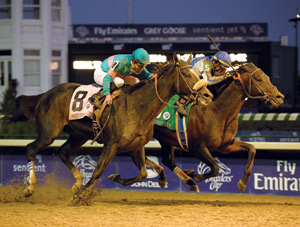 Bred and campaigned by Claiborne Farm and Adele Dilschneider, BLAME won three Grade 1 events in 2010. In June BLAME took the Stephen Foster (G1) at Churchill Downs to capture his second graded stakes win of the year. In August, BLAME captured the famed Whitney H (G1) at Saratoga over favorite Quality Road. Finally, BLAME went down in the history books as the only horse to defeat Zenyatta by winning 2010’s thrilling Breeders’ Cup Classic (G1).

BLAME finished his racing career with nine wins on both dirt and synthetic, and earnings of $4,368,214. The champion was never worse than third in 13 career starts, and admirably was first or second in every stakes start of his career.