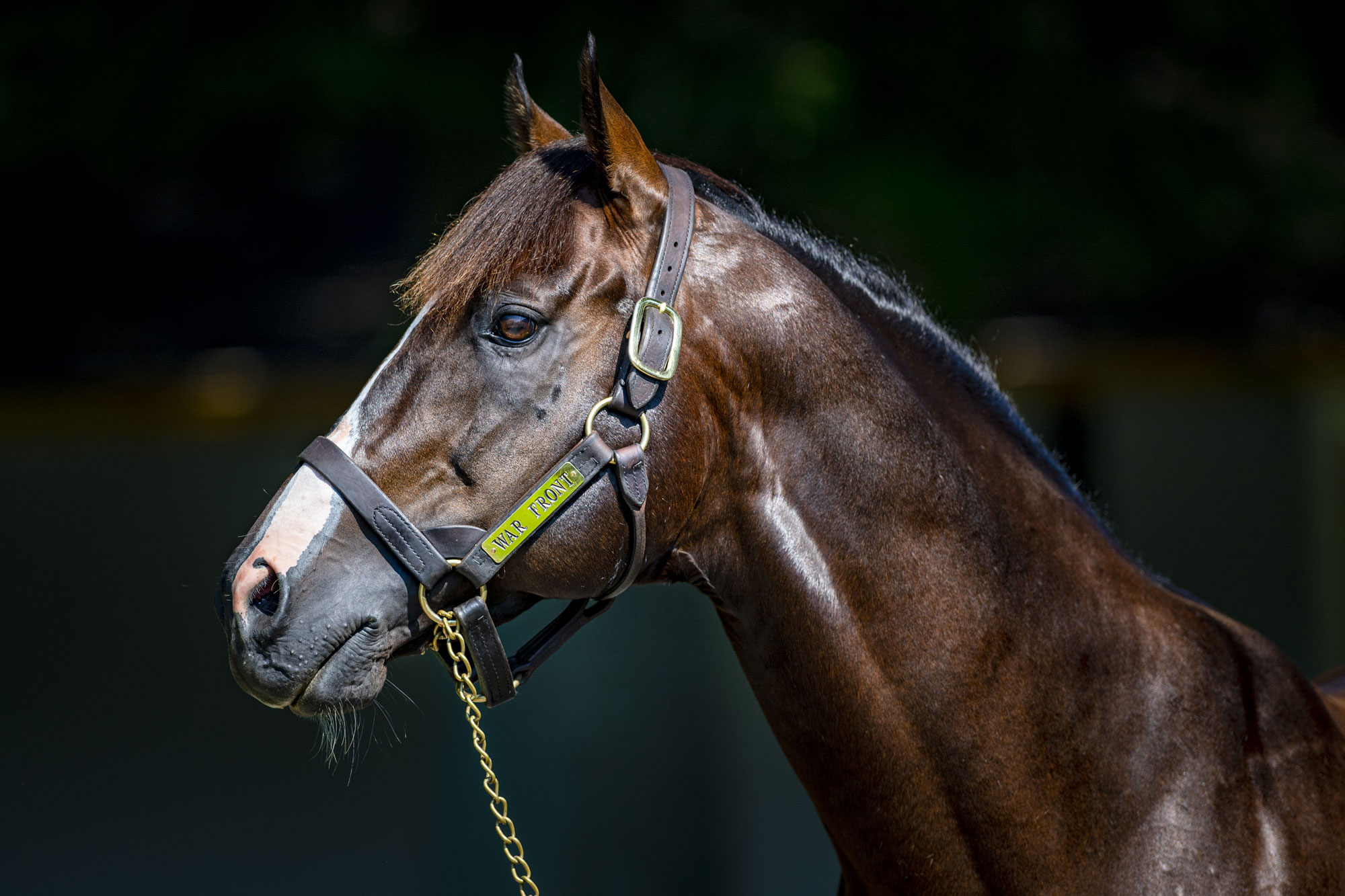 WAR FRONT’s first through the ring is the first foal out of Grade 1 winner It Tiz Well. That colt, consigned by Denali as Hip 15 is also a grandson of stakes winner It Tiz, who is a half-sister to Canadian champion Solid Appeal.

It Tiz isn’t the only stakes producer for her dam Star of the Woods, whose stakes-placed daughter Meetmeinthewoods is the dam of stakes winner Jimmy Bouncer and multiple stakes placed Rookie Mistake.

Named Fightin Side of Me, Hip 29 is consigned by Lane’s End as the second foal out of stakes winner Key to My Heart. That Galileo daughter is a daughter of Grade 1 winner A Z Warrior, who also produced stakes-placed Cole Porter. The cross Hip 29 is bred on has found major success on the track with his 11 stakes winners and 20 stakes horses from 78 runners led by Grade 1 winners U S Navy Flag, Roly Poly, and Fog of War.

Hip 42 consigned by Gainesway is another bred on a proven cross with WAR FRONT – it has already produced this filly’s full sister, the Grade 1-winning Avenge.

Avenge is one of three stakes performers for their dam Lerici, who is also the dam of WAR FRONT’s Grade 3-placed Pistoletto and the Grade 3-placed War Front daughter Lira. In all, from nine to race, Lerici has seen seven of her foals go to the winner’s circle. She is one of three stakes producers for her dam Balinese with one sister producing Grade 3 winner and Grade 1-placed Grasshopper and another producing Grade 1-placed Easy Grades.

Another full sibling to WAR FRONT Grade 1 winners is the Four Star Sales-offered Hip 46. The filly’s Group 3 winning dam Liscanna has proven to cross extremely well with WAR FRONT – all four of her stakes performers and five of her seven winners are by the stallion.

Multiple Group 1 winner Odeliz sees her son go through the ring as Hip 95 from Denali Stud’s consignment. A Group 1 winner in France and Italy, she was also a Group 3 winner in Germany and Group placed in both Ireland and England. The mare’s only runner thus far is the two-time winning filly Illogami.

Group 3 winner Say is another mare who is proven with WAR FRONT and buyers will have a chance to tap into that success by purchasing Hip 136, a filly from Gainesway. WAR FRONT and Say have teamed up to produce Grade 1 winner Fog of War and the stakes winner Naval Intelligence and Invader during their matings.

Say is a daughter of multiple Grade 1 winner Riskaverse, who is out of successful broodmare The Bink.

HIP 192 is Small Batch Sales-consigned a filly bred on the potent War Front / Galileo (IRE) cross, which includes champion U S Navy Flag. Second dam is a full sister to multiple graded stakes winner India, herself the dam of multiple Grade 1 Japanese multi-millionaire Mozu Ascot. Also under the third dam is Pilfer, the dam of Grade 1 winners To Honor and Serve and Angela Renee.

Hip 211 comes from the Claiborne consignment and is a colt from the immediate sire-making family of Scat Daddy. His young Forestry dam has produced three winners from four to race including stakes winner / multiple graded stakes-placed Classic Fit.

Just ten hips later is Hip 233, consigned by Claiborne. This filly is out of an unraced Tapit mare, which is a cross that has already produced Grade 1 winner Halladay from just nine to race. Second dam is a full sister to Grade 1 winner and multiple graded stakes producer Precious Kitten, and half to leading sire Kitten’s Joy and Justenuffheart, who in turn is the dam of champion and multiple graded stakes producer Dreaming of Anna. A potent family to give this filly every opportunity to excel on the racetrack and in the breeding shed.

Also a sibling to four other winners, this colt is also a half-brother to the dam of stakes-placed Expert. Their stakes-placed dam Chatham is just one in a long line of successful racemares and broodmares with her sisters producing four stakes winners between them. Included in that group is Shea D Summer, who added a third stakes win to her record in August with a 3 ¼ length win in the Azalea Stakes.

Topping off the first three generations of the colt’s family is also his second dam’s full sister, the champion juvenile filly Flanders, who produced a champion herself in Surfside.

Interested in what yearlings other Claiborne stallions are represented by during Week 1 of the Keeneland September Sale? Click here to see their Book 1 and 2 offerings.