A filly by WAR FRONT led the way for Claiborne-sired offerings during Book 1 of the Keeneland September sale when bringing $1.2 million from Seahorse Stables. 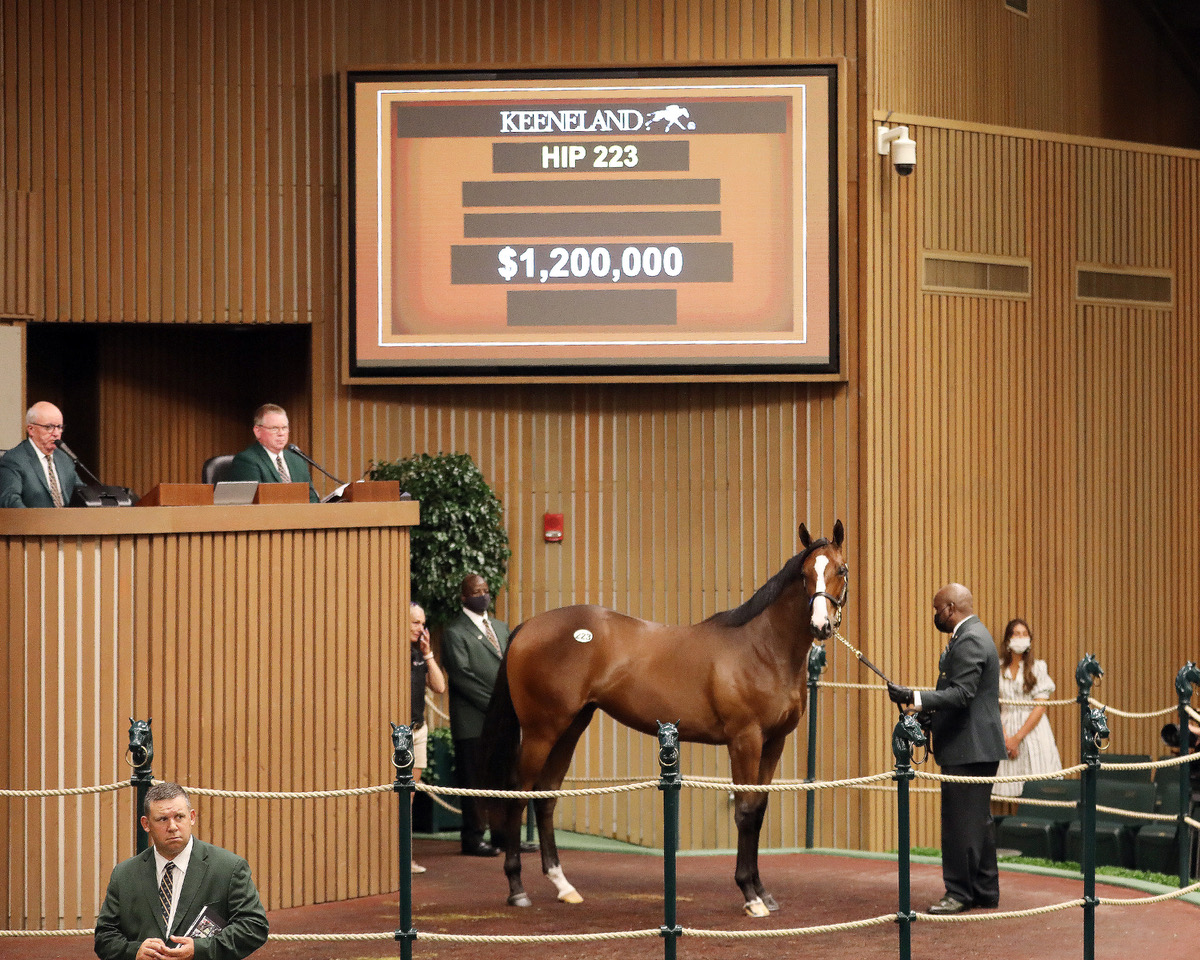 Signed for by Eddie Woods as agent for Seahorse Stables, Woods told TVG that the filly may be Ireland bound.

“[She’s] all class, everything she is supposed to be and maybe a little better; has a little more leg and scope than most of your War Fronts,” Woods told Thoroughbred Daily News. “She vetted perfectly, she may go back to Ireland. The client couldn’t travel, I’m just doing a job that normally they would do on their own.”

“We hoped for it,” Stone Farm’s Lynn Hancock told Thoroughbred Daily News. “You always hope for it. I say that every time. You come up here with a nice horse, but you’ve got to have the buyer there. People liked him on the sales grounds. He’s a beautiful physical –we think he’s one of the nicest that the mare has thrown. We’re heavily invested in the family and we love the family. The mare has been great to us. We’re really happy that some nice people ended up with him. Can’t be upset with a sale like that.”

In addition to Air Force Blue, the colt’s stakes placed dam Chatham has produced four winners from six others to race while her daughter Pinkie Pact is the dam of stakes-placed Expert. Just off the page sits his granddam Circle of Gold’s champion full sister Flanders with Circle of Gold the granddam of five stakes winners herself.

A full brother to FLATTER’s stakes winning Stifling was a popular offering during Book 1 with Courtlandt Farm landing the winning $325,000 bid on the Hunter Valley Farm offering.

The colt is a sibling to two winners out of the winning WAR FRONT mare Speedy War, who is a daughter of multiple stakes placed Maid For Speed. Maid For Speed is also a half-sister to the dam of Grade 3 winner Richiegoldgonewild and from the family of Venezuelan champion Clase Estelar.

MASTERY proved to be a hit at the Keeneland September sale when his two offerings both brought six figures.

That duo was led by the Centennial Farms purchased colt out of Spring Street, who brought $190,000. Part of the Hunter Valley Farm consignment, the March-born colt is a half-brother to three winners led by stakes winner Plentiful.

The colt’s granddam is Grade 3 winner and multiple Grade 1-placed Spring Meadows. The family is a proven international one with the seven stakes performers on the page earning their blacktype in four different countries – the United States, Canada, New Zealand, and Australia.

A MASTERY half-brother to Grade 1 winner Midnight Storm was signed for by Mike Rutherford after bringing $150,000 half-way through Monday’s session.

Offered by Penn Sales on behalf of Alex Venneri, the colt is also a half-brother to the dam of FLATTER’s Grade 3 placed Flatter Up and one other stakes-placed runner. Also on the page are stakes winners Ask Shananie and Valid Direction.

The Keeneland September Yearling Sale continues through September 24 with yearlings by Claiborne stallions on offer throughout the sale.