LE MI GEAUX and apprentice jockey Frederic Lenclud pulled off an upset Friday afternoon in the first graded stakes race at Saratoga Race Course, splashing to a 1 1/2-length victory over favored Stopspendingmaria to win the Grade 3, $100,000 Schuylerville on Opening Day. 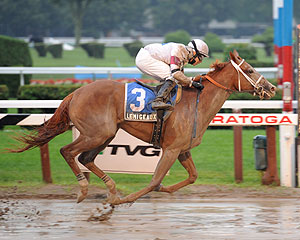 After breaking awkwardly, the daughter of FIRST SAMURAI settled in fourth as Stopspendingmaria was hounded through fractions of 21.81 and 45.87 by Let’s Get Fiscal and Show Me the Bling. Rounding the turn, Lenclud kept Le Mi Geaux well off the rail and she closed willingly through the stretch to pass the embattled leaders, hitting the wire in 1:13.67 over a sloppy track.

“We were supposed to be really close to the lead, like she did last time, but she didn’t break as sharp and there was a lot of speed, so we had to sit behind the leaders,” said Lenclud, who picked up his first Spa victory. “I thought she did something really good today because it’s hard to come back in the mud and she really finished strong down the lane.”

Stopspendingmaria held on for second, 2 ¾ lengths ahead of Show Me the Bling, who ran greenly through the stretch, with Let’s Get Fiscal, Dos Lunas, and Spa Sunrise completing the order of finish. Final Mesa was scratched.

It was the second straight victory for LE MI GEAUX, a 7 ¼ length maiden winner at Churchill Downs on June 20 in her second start, and gave her sire FIRST SAMURAI his first stakes winner. The winner’s purse of $60,000 almost tripled her earnings to $95,700 for owner and breeder Lansdon B. Robbins, III.

“I have to give all the credit to the owner,” said Dutrow, “because he was the one who wanted to run her here. I thought she was in too tough. I thought the wet track might help us, but that was only a hope.”

Dutrow said the next objective for LE MI GEAUX would likely be the Grade 1 Spinaway on September 5.