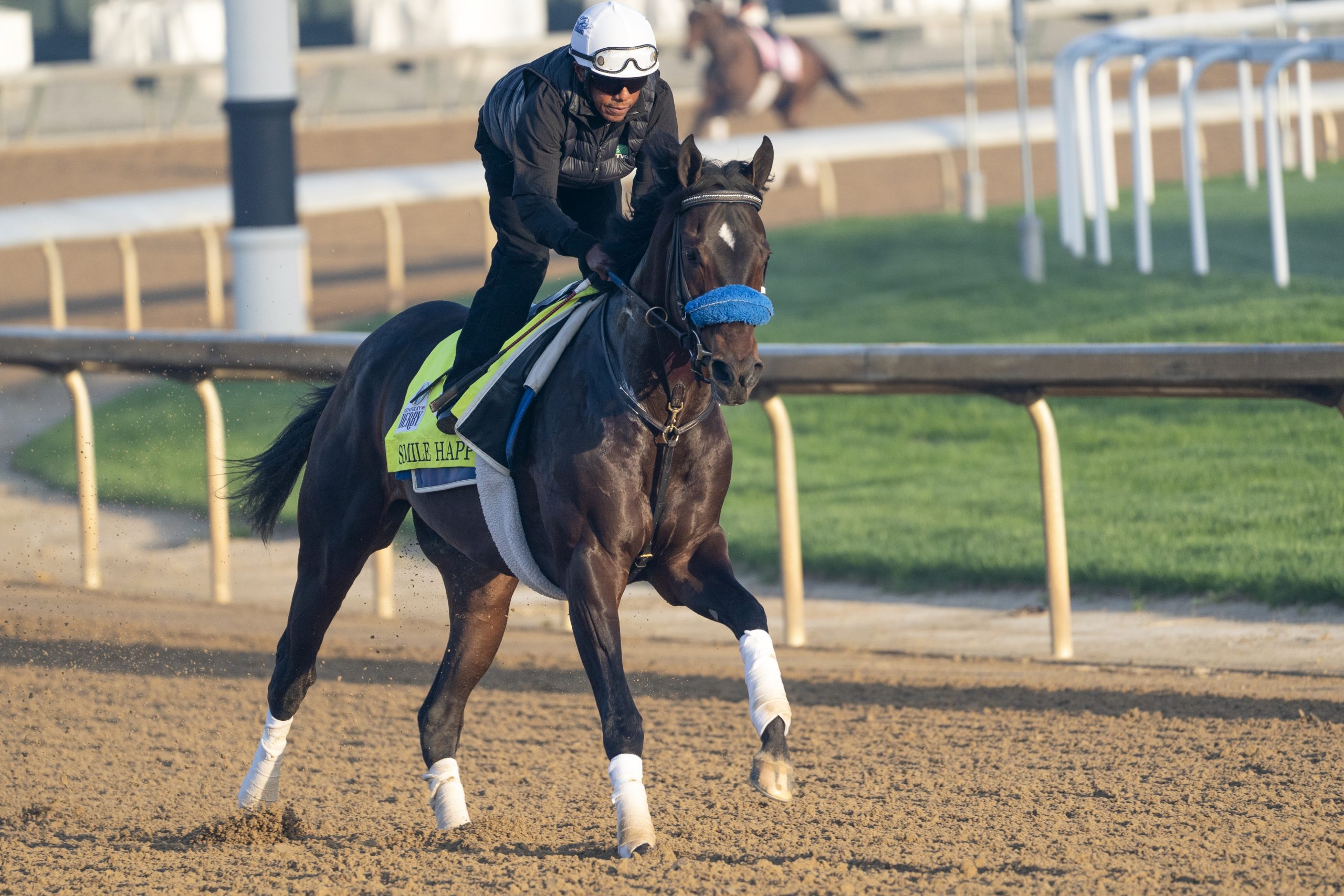 A $185,000 yearling purchase from RUNHAPPY’s stellar second crop, Smile Happy proved to have talent from the start with a 5 ½ length Maiden Special Weight victory at Keeneland last October on debut to be named a Thoroughbred Daily News Rising Star. One race later, the dark bay was making waves with a runaway 3 ¼ length victory in the Kentucky Jockey Club Stakes (G2).

“You’d think this horse ran 10 times already with how mature he acts,” regular jockey Lanerie said after the victory. “He’s very ratable and easy to ride. I felt very confident with him at the half-mile pole. I could tell I had a lot of horse beneath me. I got him into the right spot and he really kicked clear in the stretch. He’s got a bright future.”

Smile Happy took a few months off after that romp and resurfaced in the Risen Star Stakes (G2) in mid-February for his 3-year-old debut. He finished second in the race but beat multiple Kentucky Derby contenders in next up Grade 1 winner Zandon, Pioneer of Medina, and Tawny Port. He then came close to securing a victory in his Grade 1 debut in the Blue Grass Stakes (G1) but again had to settle for second when being caught near the wire.

Bred by Moreau Bloodstock and White Bloodstock, Smile Happy is trained by Kenny McPeek for Lucky Seven Stable and enters the Kentucky Derby ranked 10th on the points list. The colt drew the five hole at Monday’s post position draw, an area of the gate McPeek was hoping to be in.

“I’m real pleased with both Smile Happy in the five and Tiz the Bomb in the nine. I wanted to be inside Zandon, and that happened,” he said at the draw.

Last month McPeek told the Courier-Journal that Smile Happy may represent his sire in all three of the Triple Crown races. That was contingent on his Blue Grass result but with a second-place finish assuring him a spot in the Kentucky Derby, Smile Happy already has one of those races marked off on his calendar.

“He’s a big, strong, good-looking horse,” McPeek said. “If all goes well and assuming he runs well this weekend, he could be a horse that runs through the Triple Crown series. That’s why I didn’t want to over-race him during the winter.”

Last year, RUNHAPPY was represented in the top races by Spendthrift Farm homebred Following Sea. That colt was second in the Haskell Stakes (G1) and the H. Allen Jerkens Memorial (G1) in the 3-year-old division before winning the Vosburgh (G2) against his elders with a second-place finish in the Cigar Mile (G1) and a third in the Breeders’ Cup Sprint (G1).

While RUNHAPPY is the only Claiborne stallion who has sired a runner in this year’s Kentucky Derby (G1), the roster will be well represented in another way. In addition to WAR FRONT having two sons and a daughter with runners in the Derby, FLATTER’s multiple stakes winning daughter Needmore Flattery is the dam of undefeated Grade 1 winner Taiba and his son Upstart is the sire of Grade 1 winner Zandon.

In the Kentucky Oaks, Claiborne’s BLAME is represented by daughter Quaver’s likely race favorite Kathleen O. – who another by FLATTER’S son Upstart – and FIRST SAMURAI is the damsire of Bourbonette Oaks winner and Kentucky Oaks hopeful Candy Raid.