Claiborne will have a major rooting interest this Friday in the G1 Kentucky Oaks. One of the farm’s stallions—First Samurai—has a daughter that will go postward in the Run for the Lilies. 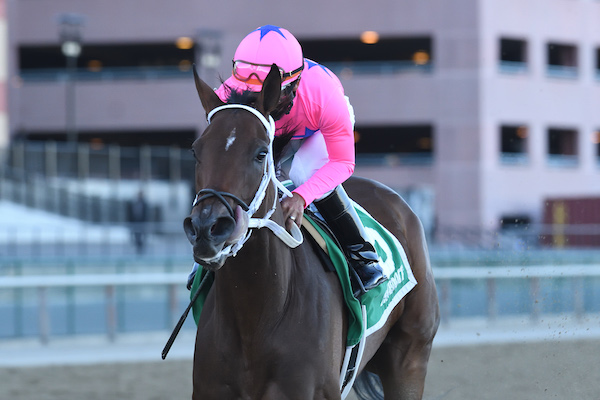 Miss Sky Warrior represented her sire in a big way and stamped her ticket for the Oaks with a resounding 13-length victory in the G2 Gazelle over nine furlongs at Aqueduct Racetrack April 8. Listed at 9-2 on the morning line for the Oaks, Miss Sky Warrior is the only filly in the field to have won at the Oaks distance of nine furlongs. Paco Lopez has the mount and will break from post position 10.

The Gazelle marked Miss Sky Warrior’s fifth consecutive win, four of which are graded stakes. The filly entered the race off a victory in the G2 Davona Dale Stakes at Gulfstream Park March 4. As a 2-year-old, she also captured the G3 Tempted Stakes and G2 Demoiselle Stakes, both at Aqueduct. Trained by Kelly Breen for owners/breeders Al and Arlene London’s Arlene’s Star Stable, she has earned $641,590.

Miss Sky Warrior worked a half-mile at Churchill Downs in :49 1/5 April 27 in preparation for the Oaks.

“We’re ready to run,” Breen told The Blood-Horse. “Everything seems pretty good. I think my horse is pretty well proven and I’m just trying to get her back to producing what she did last time out. She has won at this distance and she’s training good, and eating good, and we’re feeling pretty good for where we need to be.”

Kentucky-bred Miss Sky Warrior was produced from the winning Conquistador Cielo mare Sky Minister and was foaled and raised at the Greathouse family’s Glencrest Farm near Midway, Ky.

“We’re on the cusp; we’re one of the choices,” Al London told The Blood-Horse. “Do we have the ability to beat 13 horses? I hope so. We’re not going (to Louisville) to be social, or place … we’re going to win. We want to win; we hope to win; but we don’t expect to win.”

First Samurai is the sire of G1 winners Lea, Justin Phillip, Executiveprivilege and Sovereign Award champion Stacked Deck. His 2017 2-year-olds have brought prices up to $540,000. First Samurai stands for $15,000 at Claiborne.