Coming out of a wire-to-wire win in an off-the-turf Maiden Special Weight at Belmont on October 16, LEAVE THE LIGHT ON again went gate to wire to win Aqueduct’s Remsen S.-G2 by a half length. The 2-year-old colt from the third crop of HORSE GREELEY took the lead from the start, repelled challengers around far turn and again inside the 1/8 pole to prevail in a game performance. Bred in Kentucky by All Gold Racing LLC. out of the Mineshaft mare Lantern Glow, LEAVE THE LIGHT ON was purchased by Klaravich Stable for $210,000, the third highest colt of this year’s first session of the OBS April 2YO sale. He worked a quick :10 flat at the under tack show, the second fastest time for a furlong. Trained by Chad Brown,LEAVE THE LIGHT ON races for Klaravich Stables Inc. and William H. Lawrence. 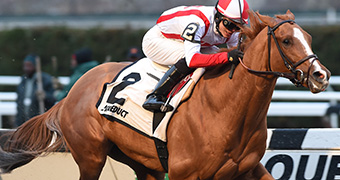