Seth Hancock Rises to the Occasion

Seth Hancock was not expecting to take over the operations of Claiborne Farm in his early 20s, but the sudden death of his father, Bull, necessitated he rise to the occasion. Although Bull Hancock’s will pointed toward joint leadership in running Claiborne with outsider supervision, matters soon worked their way out for Seth to be in charge. Seth had attended The University of the South and The University of Kentucky and brought an agriculture degree to what was intended as a lengthy course of working in various divisions of the farm. He would go on to lead Claiborne Farm longer than anyone before him.

That this soft-spoken young man had a full measure of the family’s savvy was indicated when he purchased Judger from his father’s dispersal. The colt raced for Seth’s Cherry Valley and won the Florida Derby and Blue Grass Stakes. 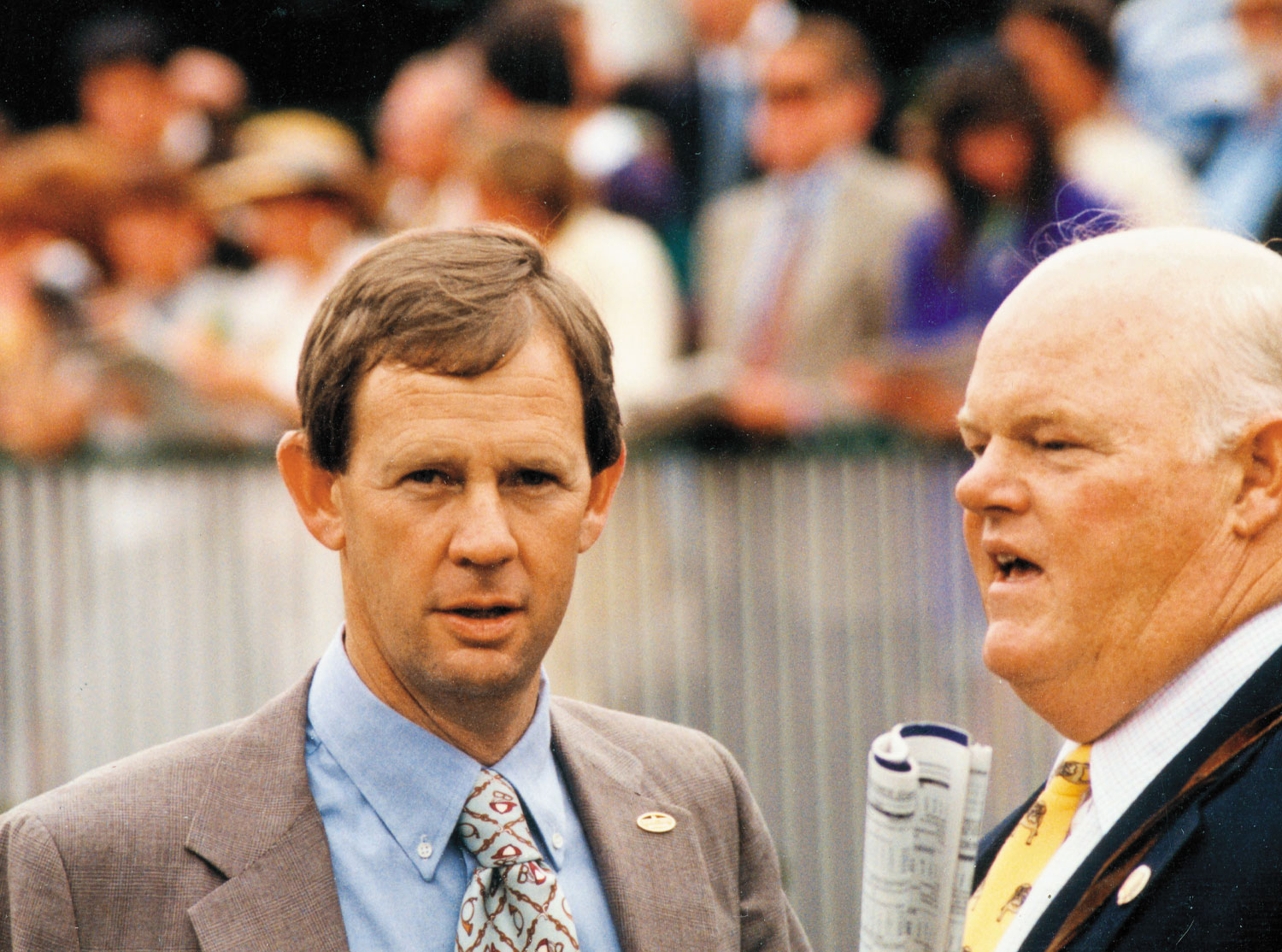 Then came Secretariat, a colt bred by Christopher Chenery, a longtime associate of Bull Hancock. Chenery’s daughter, Penny Tweedy, was leading the family through its transition and the two-year-old champion Secretariat seemed poised for greatness. The financial situation, estate taxes, etc., called for a solution, and the young Hancock stepped up as his father would have and syndicated the horse for $6 million, an astounding figure at the time. 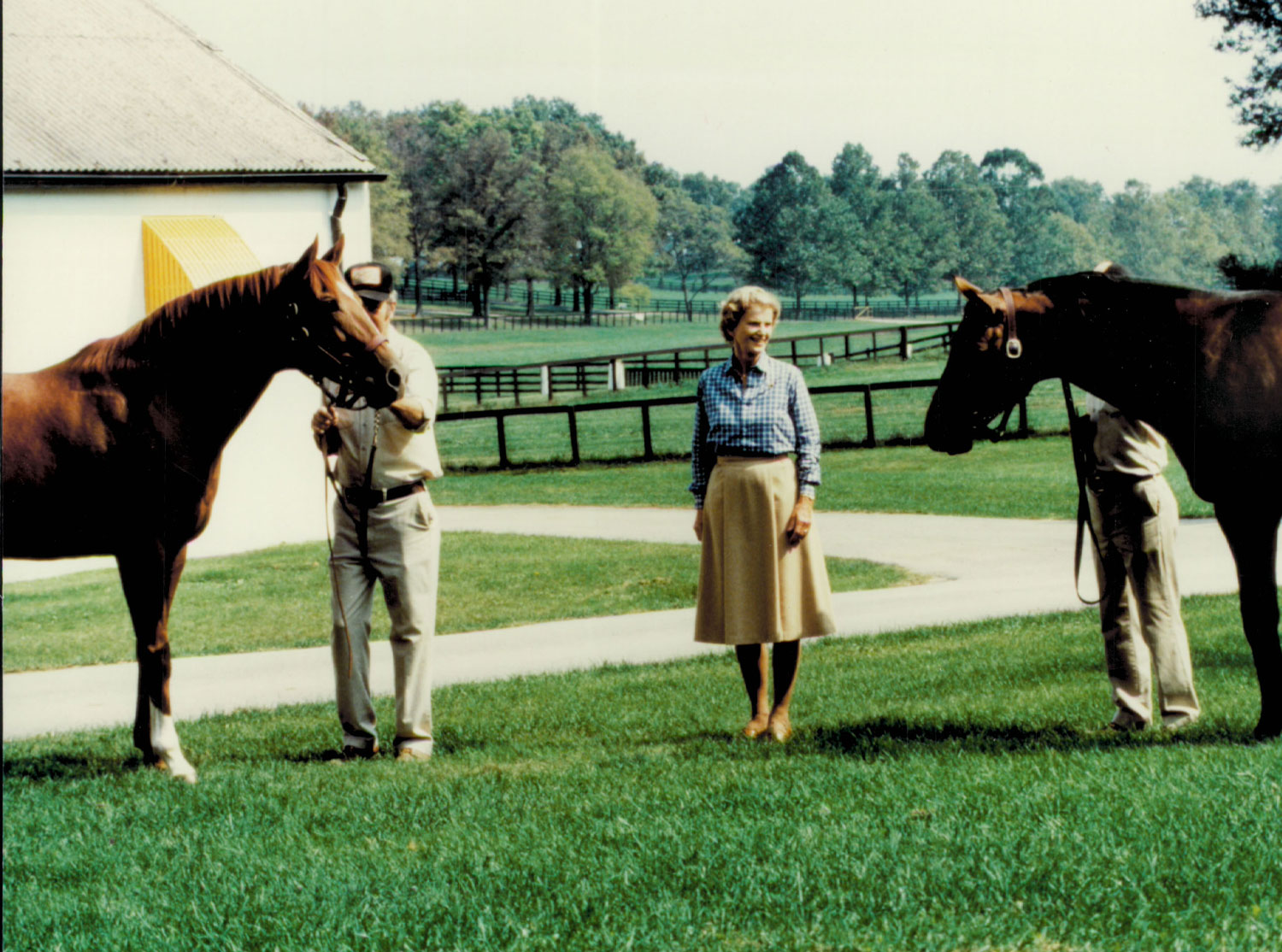 Success in the Sales Ring

Seth’s father, Bull Hancock, had famously converted Claiborne’s market-breeder business plan of Arthur B. Hancock’s day. However, in his evaluation of what would need to be done in the event of his death, Bull Hancock expressed the wish that Claiborne return to selling.

Seth was very much like his father in stating frankly that he did not regard himself as particularly good at selling yearlings. Nevertheless, he quickly compiled an impressive resume. Seth sold Wajima (Bold Ruler) at Keeneland for $600,000, a record at the time. He followed that up with a $1.3 million sale topper at the 1978 Keeneland July Sale, at the time the second-highest price ever for a yearling. Named Nureyev, the sale topper was bred and raised at Claiborne Farm. He became a high-class racehorse abroad and retired to stud at Walmac Farm. 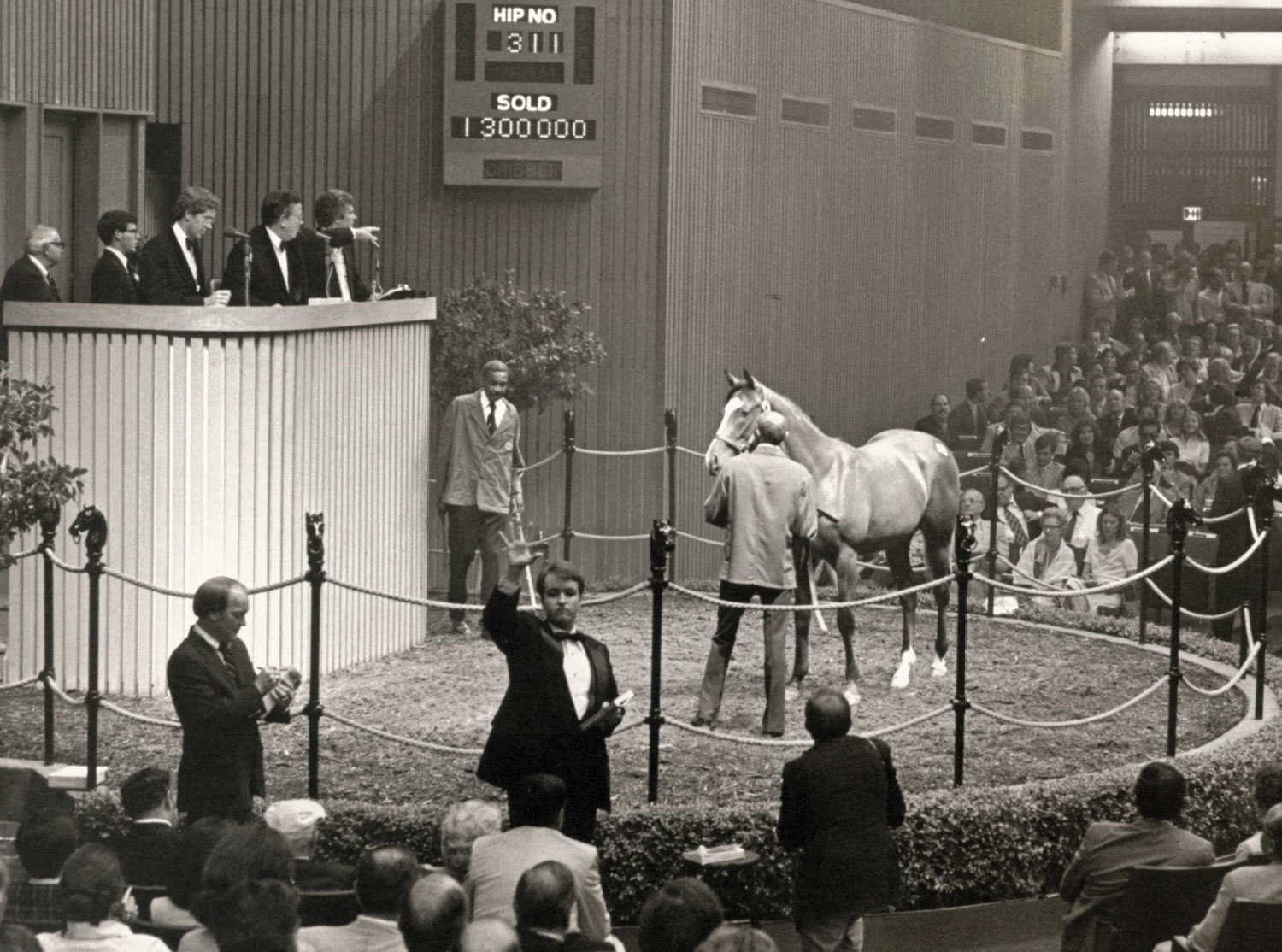 Nureyev brings $1.3 million at auction in 1978; bred, raised and sold by Claiborne Farm

An Eye For Future Stallions

Nureyev proved himself among the best sons of Northern Dancer at stud, boasting Seth’s ability to breed colts destined to be major stallions at other farms early in his tenure. Another major development on the international stallion scene was Caerleon, a Nijinsky II colt bred and sold by Seth Hancock. Caerleon was purchased at Keeneland and won the French Derby before a stud career that accounted for more than 100 stakes winners, twice the leading sire in England and Ireland. Further, Seth Hancock had a role in the breeding of Sadler’s Wells, the great Northern Dancer stallion whose dam, Fairy Bridge, was bred by Claiborne.

Like his father and grandfather, Seth Hancock wielded influence in ways that did not always put his name down as a breeder. It was he who suggested to Ben Castleman that he send his mare My Charmer to the modestly-priced Claiborne stallion Bold Reasoning. The result was Seattle Slew, who brought only $17,500 as a yearling, but became the first undefeated Triple Crown winner and a highly important stallion.

In addition to having strong influence on the breeding of future stallions, Seth Hancock added his own chapters on his father’s and grandfather’s knack for acquiring future stars. Among them Mr. Prospector, Danzig and Unbridled. Homebreds Pulpit and Forty Niner added to the elite rosters that stood at Claiborne Farm during Seth’s leadership. One of the homebreds destined for an exceptional stallion career was Swale. 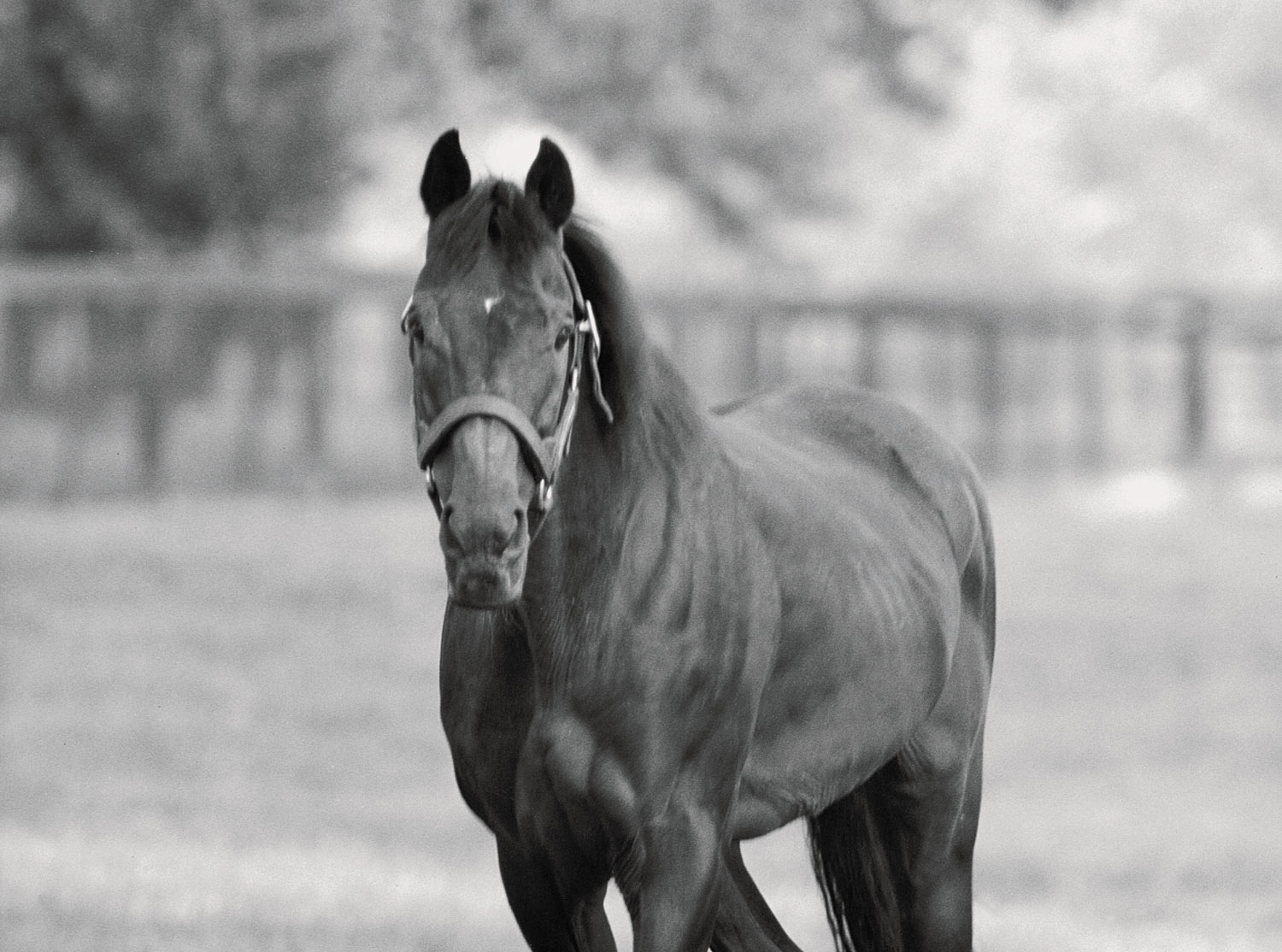 Mr. Prospector became one of the four most influential sires of the late twentieth century (historically Claiborne has stood 3 of the 4, including Nasrullah and Bold Ruler)

A milestone for claiborne

Seth Hancock reached a milestone for Claiborne Farm when Swale carried the Claiborne colors to victory in the 1984 Kentucky Derby. The euphoria was short, for soon after Swale added a victory in the Belmont Stakes, he collapsed and died. It was obviously a shocking personal sadness to have such a sire prospect suddenly denied his opportunity. Swale was voted the champion three-year-old and his earnings helped Seth Hancock click off another achievement of his grandfather and father, that of being leading breeder. Claiborne-breds topped the list with earnings of $5.5 million in 1984. 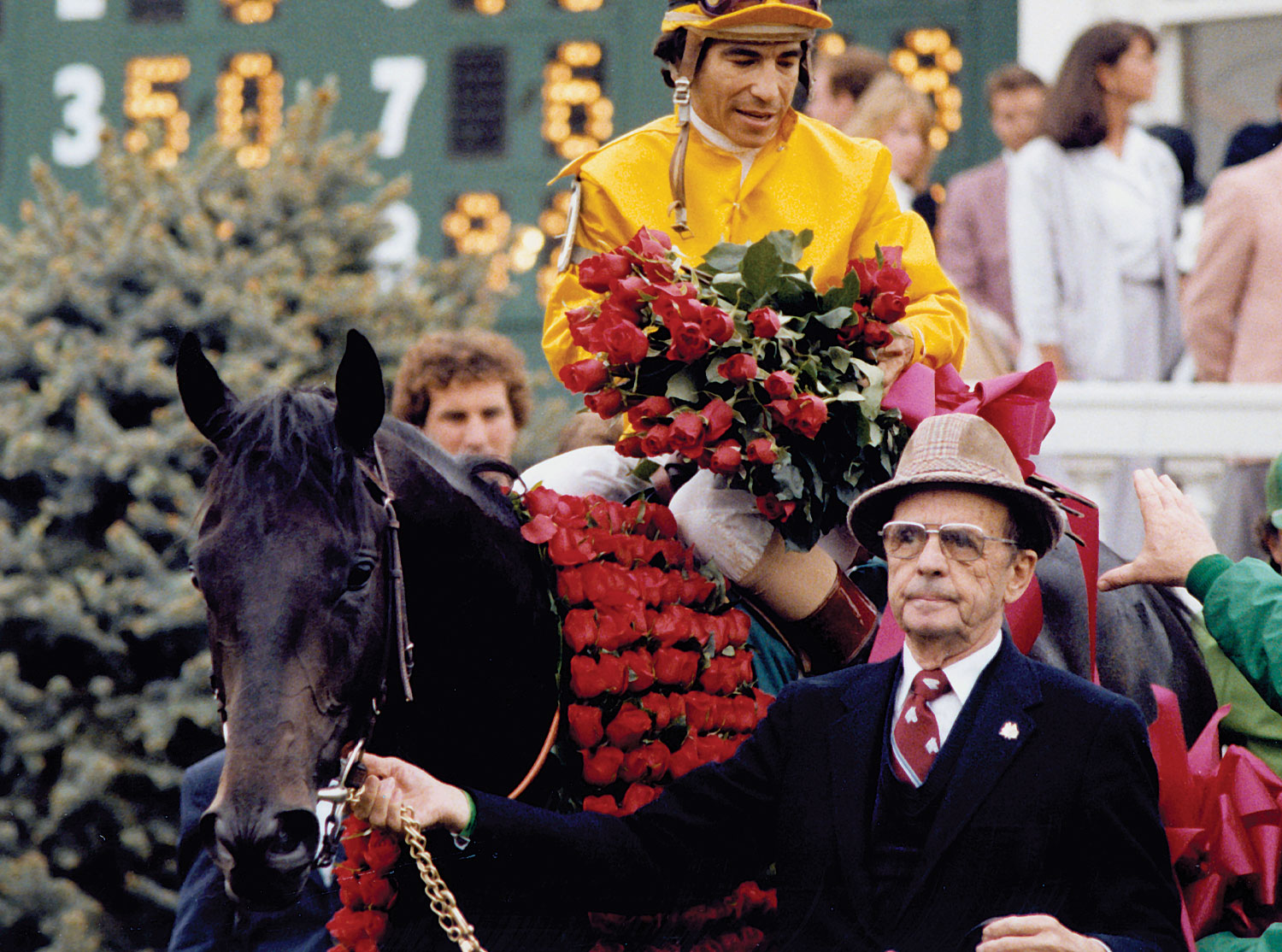 In Seth Hancock’s 40-plus years, he too saw plenty of change. One was the creation of the Breeders’ Cup in 1984. As the plan was being developed, Seth gave it an important imprimatur by signing up the prestige of Claiborne to provide income from stallion seasons, a key source of Breeders’ Cup funding. Claiborne homebred Lure was twice a Breeders’ Cup winner for the farm.

Another major event was the passing of William Haggin Perry in 1993, ending a wonderful partnership. Since the mid 1990s, Mrs. Adele Dilschneider has become a partner and trusted friend for Claiborne Farm. Together they have raced a number of major stakes winners including Eclipse Champion and Breeders’ Cup Classic-G1 winner Blame, Grade 1 winner and top stallion Arch, and record-setting G1 stakes winner Lea.

In addition, Mrs. Dilschneider was a partner in the filly Yell, whose victory in the 2003 Raven Run S. at Keeneland was historic. Claiborne Farm was awarded the one-of-a-kind Gold Bowl. The bowl represents the farm’s success in Keeneland’s major races and is a feat that only Claiborne has accomplished.

In 2015, Seth Hancock stepped aside and his son Seth Walker Hancock Jr. took the helm. 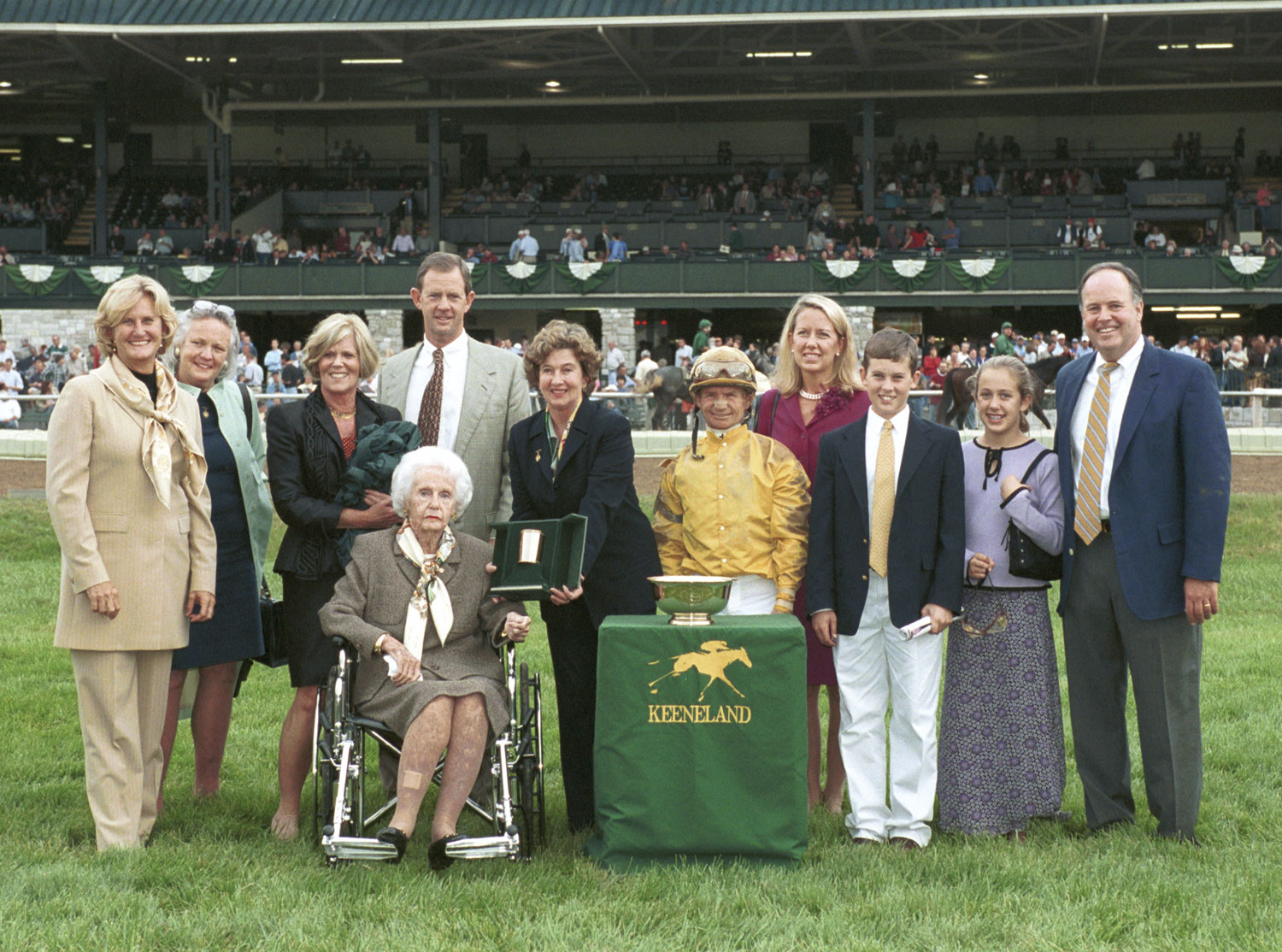 The Hancock family and Adele Dilschneider are presented with the Keeneland Bowl after YELL wins the Raven Run S. (G3). Claiborne was the first owner to aquire this milestone trophy.