A stakes winner and multiple Grade 1 placed as a juvenile last year, UPSTART kicked off his 3-year-old campaign with a rousing 5 1/2-length win in the $400,000 Holly Bull S.-G2. Pressing the pace from the start in this 1 1/16-mile race after breaking from post eight, the son of FLATTER moved up to challenge for the lead with about three furlongs to go. He soon dispatched the frontrunner and then just ran away from the field earning a stellar 105 Beyer. Last year, UPSTART won his debut and the $200,000 Funny Cide S., both at Saratoga. In his third start, he was runner-up in the G1 Champagne S., earning a 102 Beyer. In his next outing and his last start of 2014, UPSTART recovered from a bumping incident at the top of the lane to place in the Sentient Jet Breeders’ Cup Juvenile-G1, missing the runner-up spot by a nose. He now has three wins and two placings in five starts and earnings of $701,880. Bred by Mrs. Gerald A. Nielsen out of the Touch Gold mare Party Silks and racing for Ralph M. Evans, the Rick Violette trainee is likely to be seen next in the G2 Fountain of Youth S. here on February 21st or the G3 Gotham S. at Aqueduct on March 7th, according to his trainer. 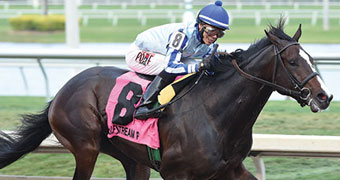