Making his first start since winning the G1 Donn H. here last February 9th, LEA finished with a last surge to win the Hal’s Hope S.-G3, a race in which he won last year. In this one mile stakes, the 4-year-old colt by FIRST SAMURAI raced just behind the frontrunners, then angled out in the stretch and ran down the leaders to win by 1/2 length, earning a dazzling 106 Beyer. Last year LEA used the Hal’s Hope as a stepping stone to his track record-setting performance in his 1 1/8-mile Donn H.-G1 win. The final time in that race was a sensational 1:46.86. 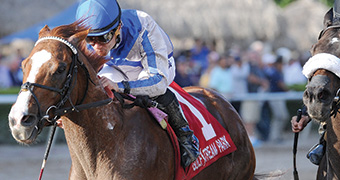 Bred in Kentucky by owners Adele Dilschneider and Claiborne Farm out of Greenery, by Galileo, LEA was raised at Claiborne Farm. A Graded stakes winner on both dirt and turf, LEA has seven wins and four placings in 13 starts and has earned $802,618.