Claiborne Farm stallion Data Link was represented by his first winner April 19 when his juvenile daughter Di Maria scored a decisive three-length victory in her career debut at Gulfstream Park. 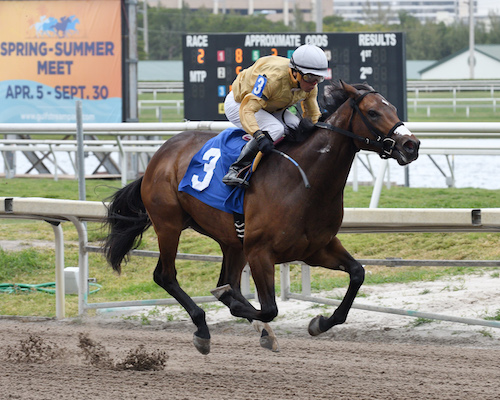 Trained by Javier Negrete for Carlos Munoz, Di Maria is the first starter for Data Link. She was quick out of the gate in the 4 ½-furlong maiden special weight contest, which marked Gulfstream’s first juvenile race of the season. After tracking early leader La Chica Rippol through fractions of :22.16 and :45.12, Di Maria surged ahead at the top of the stretch and continued her advantage to the wire. She completed the distance in :51.50.

Bred and raised in Kentucky by Elm Tree Farm, Di Maria is out of the Pulpit mare Thine, who is a half sister to graded stakes winner and stakes producer Derrianne (Cozzene). Di Maria is Thine’s third winner in as many starters. The mare has a yearling colt this year by Paynter.

Data Link retired from racing having won or placed in seven graded stakes, for career earnings of $831,335. He stands for $7,500 at Claiborne.