The 21-year-old son of Kris S., out of Aurora, by Danzig, sired 58 stakes winners, 34 graded stakes winners, 11 Grade 1 winners, and four champions during his stud career, which began in 1999. His total progeny earnings were over $53-million.

Among the top runners sired by Arch, perhaps the most notable is champion Blame, a 3-time Grade 1 winner and the spoiler of Zenyatta’s historic winning streak in the 2010 Breeders’ Cup Classic.

Arch’s influence as a sire extended well beyond the United States, as evidence 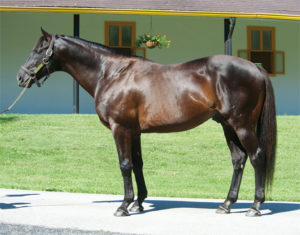 On the track, Arch won five times for his owners, Adele Dilschneider and Claiborne Farm, and was on the board in six of seven career starts. A winner in his two-year-old debut at Keeneland, he returned the following year with decisive victories in the Super Derby (G1) and a track-record-setting performance in the Fayette Stakes (G3) at Keeneland, going 9.5 furlongs in 1:53.87.

“We are saddened by the loss of Arch,” said Bernie Sams. “He was a classy stallion who had the ability to sire top class horses that performed well both on the track and in the auction ring.”

Arch was the leading sire at this year’s Keeneland January Sale by both gross and average, highlighted by the $700,000 sale topper. He was also the sale’s leading covering sire.