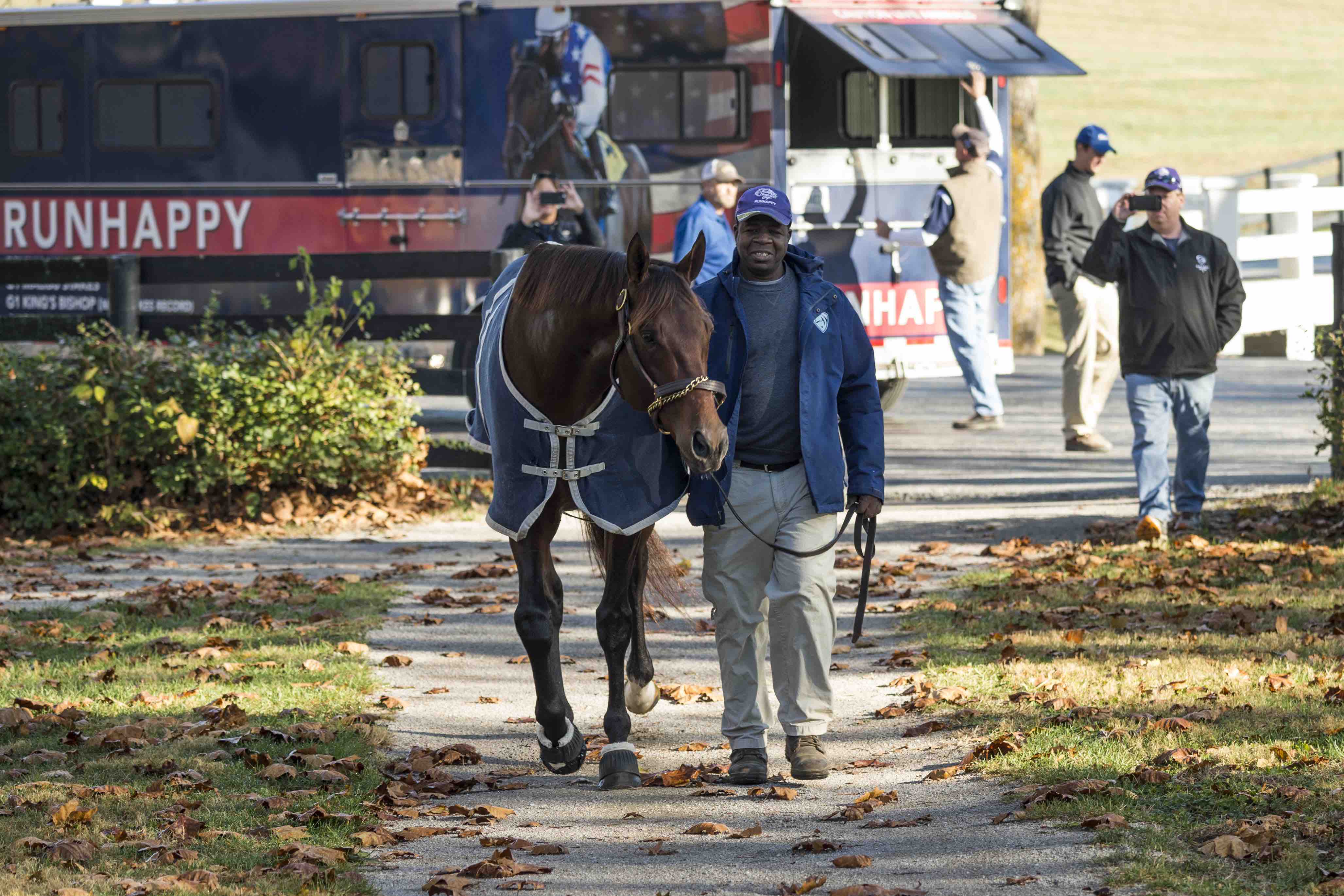 Paris, Ky – Gallery Racing has announced that 2015 Eclipse Champion Sprinter Runhappy has been retired from racing and will enter stud at Claiborne Farm in 2017.

Undefeated in sprint competition, Runhappy won at six different tracks, scoring on both all-weather and dirt surfaces labeled fast, sloppy and muddy, all the while racing 100% drug free.

A breakout winner in his two-year-old debut by over 8 lengths, Runhappy continued his dominance at three, winning 6 of 7 starts en route to an Eclipse Award as Champion Male Sprinter.

His eye-popping performances included a resounding 4-length victory in the King’s Bishop Stakes (gr. I) at Saratoga in which he stopped the clock in a blistering stakes-record time of 1:20.54 for seven furlongs. It was the fastest running of the King’s Bishop in the race’s 32-year history and earned Runhappy a 113 Beyer Speed Figure, the best at seven furlongs or less in 2015 and the best of any three-year-old last year, other than American Pharoah.

In his next start, the Phoenix Stakes (gr. III) at Keeneland, Runhappy prevailed on a sloppy track over reigning sprint champion Work All Week and the speedy multiple grade I winner, A.P. Indian.

Later that month, he returned to Keeneland to face the world’s fastest sprinters in the Breeders’ Cup World Championships. Facing a strong 14-horse field that included four-time grade I winner Private Zone, Runhappy closed with determination to win the Breeders’ Cup Sprint (gr. I), completing the distance in 1:08.54, a track record at the historic Keeneland Race Course. His 108 Beyer Speed Figure in the Breeders’ Cup was the year’s fastest by a three-year-old at six furlongs.

Runhappy finished his magical three-year-old campaign with another decisive victory, this time by 3 ½ lengths in the Malibu Stakes (gr. I) at Santa Anita on Dec. 26. Following the race, Hall of Fame jockey Gary Stephens commented, “He blows me away. That was only the second time I’ve sat on him and to get to feel that power coming into the stretch was awesome.”

The victory in the Malibu was Runhappy’s sixth win in a row and third grade 1 score. His efforts earned him nominations for three Eclipse Awards: Champion Male Sprinter, Champion Three-Year-Old Male, and Horse of the Year. The only horse nominated for three 2015 Eclipse Awards, Runhappy was ultimately crowned Eclipse Champion Male Sprinter, while conceding Horse of the Year and Champion Three-Year-Old honors to Triple Crown winner American Pharoah.

“The decision to retire Runhappy was both difficult and easy,” said owner Jim McIngvale. “On one hand, we wish he could run forever. This is by far the most incredible horse we’ve ever owned and he’s brought so much joy to our family and his fans. But on the other hand, we’ve always pledged to do what’s best for the health and happiness of Runhappy. For that reason, we put our strong emotional attachments aside and decided to retire him from racing. Now we’re filled with gratitude and enthusiasm watching Runhappy move into the same stall occupied by Secretariat, Unbridled, Easy Goer, and Bold Ruler to begin his stud career at the world-renowned Claiborne Farm.”

Bred in Kentucky by Wayne, Gray and Bryan Lyster, the four-year-old son of Kentucky Derby winner Super Saver was purchased by Jim McIngvale for $200,000 at the 2013 Keeneland September Sale. He is the first foal out of the Broken Vow mare, Bella Jolie.

In ten career starts from ages 2 to 4, Runhappy earned $1,496,250. From seven wins, the four-time graded stakes winning Champion posted three grade I victories, shattered speed records at Keeneland and Saratoga, and became the only male this century to win a Breeders’ Cup race on dirt without Lasix.

“We are thrilled and honored to welcome Runhappy to Claiborne,” said Claiborne Farm representative Bernie Sams. “He came out of his last race healthy and sound, but everyone felt the timing was right. He is one of the most impressive racehorses I have ever seen and when you start to dig into his pedigree, it’s no surprise why he was so successful. We obviously have a great deal of confidence that he’ll pass his tremendous speed onto his progeny.”