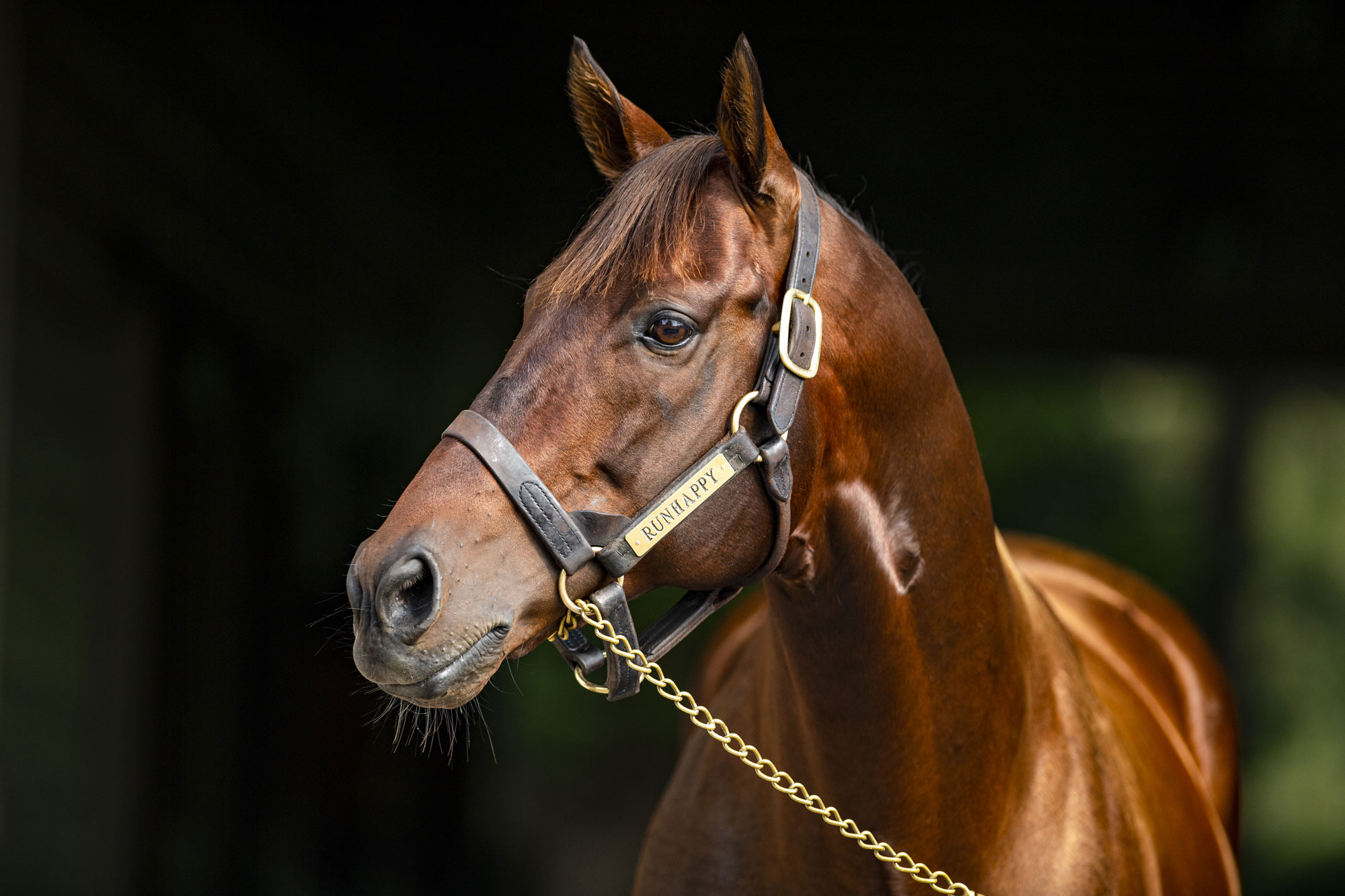 Breeding:  Runhappy was bred in Kentucky by Wayne, Gray, and Bryan Lyster of Ashview Farm. He is the first foal out of the winning Broken Vow mare Bella Jolie, who was claimed for just $5,000 as a 3-year-old by the Lyster’s at Delaware Park. Bella Jolie is now the dam of three winners from three runners. By 2010 Kentucky Derby winner Super Saver, Runhappy was purchased by James McIngvale at the 2013 Keeneland September sale for $200,000.

Race Record:  From his very first trip to the post, Runhappy made sure everyone took notice. Debuting at Turfway Park in December of 2014, the 2-year-old raced greenly but overcame a troubled start to kick away from a field of 10 to win by a visually impressive 8 ¼ lengths.

As a 3-year-old Runhappy strung together a remarkable 6 race win streak, including 3 Grade 1 victories! Romping in the Grade 1 King’s Bishop at Saratoga, Runhappy put away the likes of Limousine Liberal and Competitive Edge and set a new stakes record after completing the 7-furlong test in 1:20.54. After a win in the Grade 3 Phoenix Stakes at Keeneland, Runhappy set his sights on the Grade 1 Breeders’ Cup Sprint. Once again Runhappy stepped up to the plate, running down the more seasoned 4-time Grade 1 winner Private Zone to prevail by ¾ length in a track record 1:08.54 (6 furlongs). Rounding out his 3-year-old campaign with a score in the Grade 1 Malibu at Santa Anita, Runhappy was named 2015 Eclipse Champion Sprinter. After 2 starts as a 4-year-old, Runhappy retired to stud duty at Claiborne Farm.

Stud Career: Runhappy was retired to stud at Claiborne Farm for the 2017 season at a fee of $25,000. “We are thrilled and honored to welcome Runhappy to Claiborne,” said Claiborne Farm representative Bernie Sams. “He came out of his last race healthy and sound, but everyone felt the timing was right. He is one of the most impressive racehorses I have ever seen and when you start to dig into his pedigree, it’s no surprise why he was so successful. We obviously have a great deal of confidence that he’ll pass his tremendous speed onto his progeny.”

Runhappy’s progeny will head to the races in 2020, but thus far have been received very well in the public marketplace. His weanlings have realized up to $240,000 and his yearlings up to $650,000. Runhappy was the leading freshman sire at the Fasig Tipton Saratoga Select Sale last month, with 4 of his yearlings averaging an impressive $395,000. We have a lot to look forward to with Runhappy and are both anxious and excited to see his progeny at the races next year!

Here’s what Runhappy’s groom Kyle had to say about the bay stallion:

How long have you been Runhappy’s groom? I’ve been at Claiborne since January of 2017 and I have groomed Runhappy since November of 2017.

Tell us a little bit about Runhappy’s personality. Runhappy has a very honest personality; he lets you know when he’s tired, grumpy, happy or hungry!

Does Runhappy have any quirks/funny habits? He tilts his head sideways when he’s chewing on peppermints or begging for more mints.

What are Runhappy’s favorite things? Does he enjoy treats? He loves treats, especially peppermints and apples, but only the red ones!

Do you have a favorite memory or story involving Runhappy? I can’t say there’s one particular memory that stands out. He has an indelible talent for putting a smile on my face with the way he is most days. He is a fun horse to be around.

Does Runhappy’s demeanor change much between the off season and breeding season? He maintains a strong desire for napping and eating year round!