This month’s Stallion Spotlight features Lea, a Grade 1 winning millionaire by our own First Samurai. 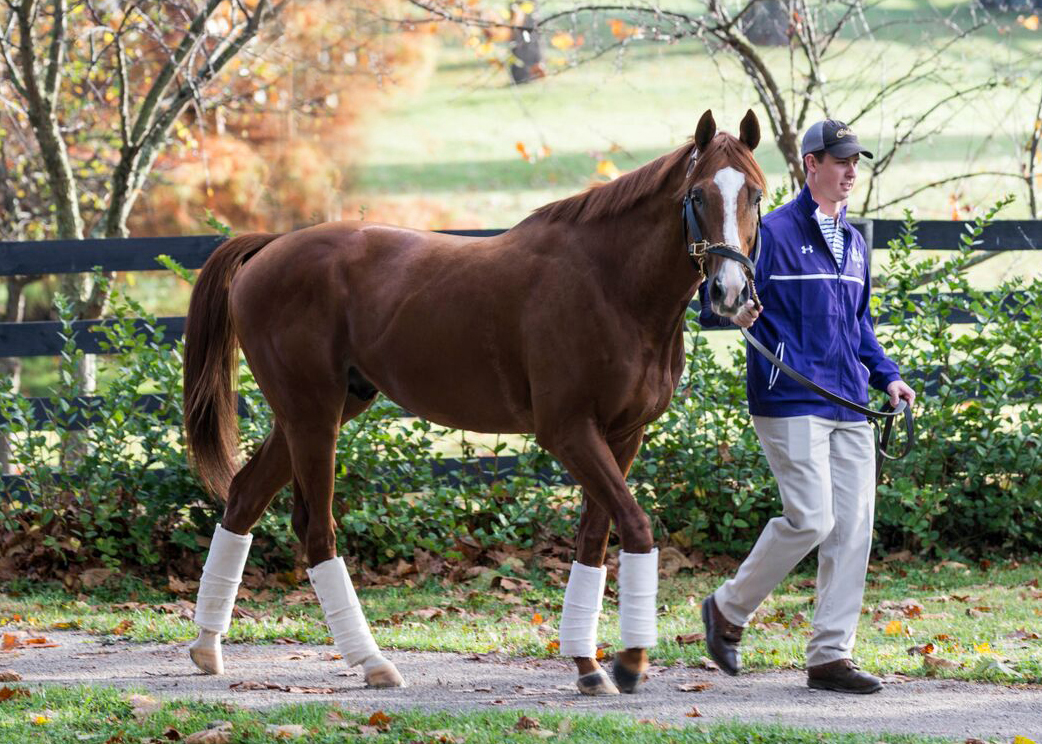 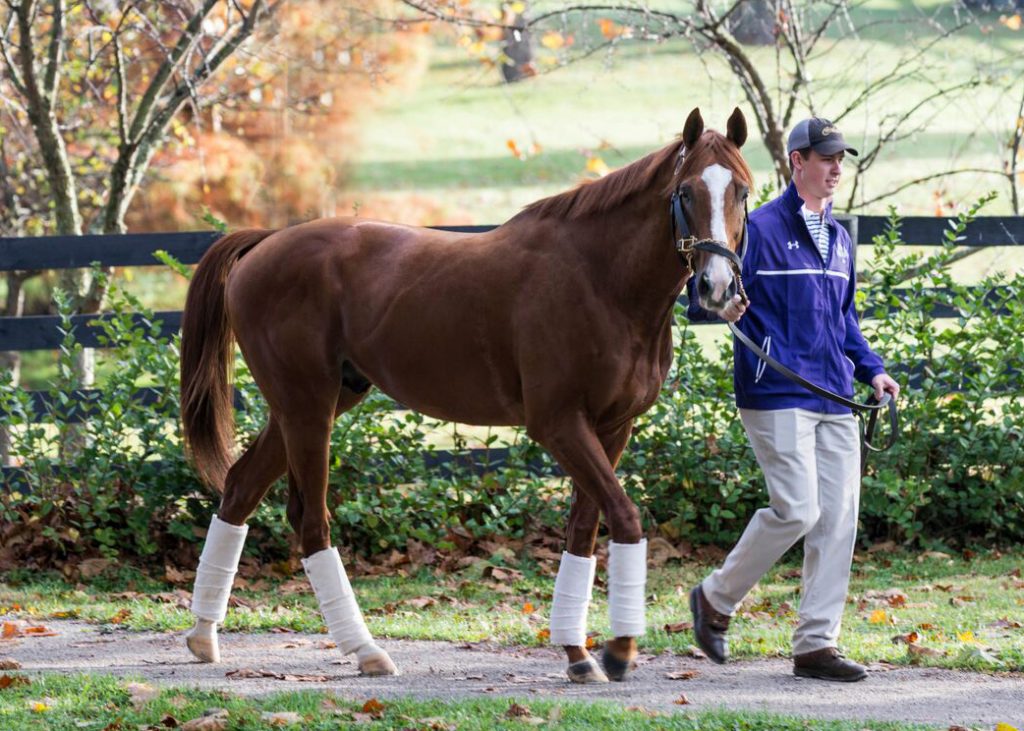 Walker Hancock leads Lea back to his birthplace following his retirement from racing in November 2015.

Race Record:  Lea was trained by All Stall through his 4 year old campaign and joined the barn of Hall of Famer Bill Mott for his final two season at the racetrack. Lea made his debut as a 3-year-old and broke his maiden on second asking at Saratoga. Following that effort with another win a month later, Lea stepped up to Graded Stakes company for his final 2 starts as a 3-year-old. He rewarded his breeders with a 3rd place effort after a wide trip in the Hawthorne Derby and capped off his 2012 campaign with a win in the Gr. 3 Commonwealth Stakes at Churchill Downs.

As an older horse, Lea contested graded stakes company an additional 13 times, winning the Grade 1 Donn Handicap in track record time and posting back-to-back wins in the Grade 3 Hal’s Hope S. As a 6 year old, Lea shipped abroad and finished a valiant third in the 2015 Grade 1 Dubai World Cup on dirt before switching surfaces to be a very close second to Mondialiste (IRE) in the Grade 1 Woodbine Mile on the turf. Winning or placing in a total of 12 Graded Stakes on both turf and dirt during his career, Lea proved himself as an incredibly versatile and consistent racehorse. Retired at the end of his 6-year-old campaign after a runner-up finish in the Grade 1 Breeders’ Cup Dirt Mile, Lea amassed $2,362,398 in lifetime earnings.

Stud Career:   Lea returned to his birthplace, Claiborne Farm, and entered stud in 2016 for a fee of $12.500. His progeny has been very well received at public auction, with first-crop yearlings selling up to $650,000, and first crop 2-year-olds demanded prices of up to $430,000. His first crop of runner’s head to the track this year, and on July 4th Lea celebrated his first winner! In addition, Claiborne Farm and Adele Dilschneider filly Vast was an impressive MSW winner against stout competition on debut at Saratoga. Lea’s career at stud looks to have a very bright future and we look forward to watching his progeny at the racetrack throughout the year. 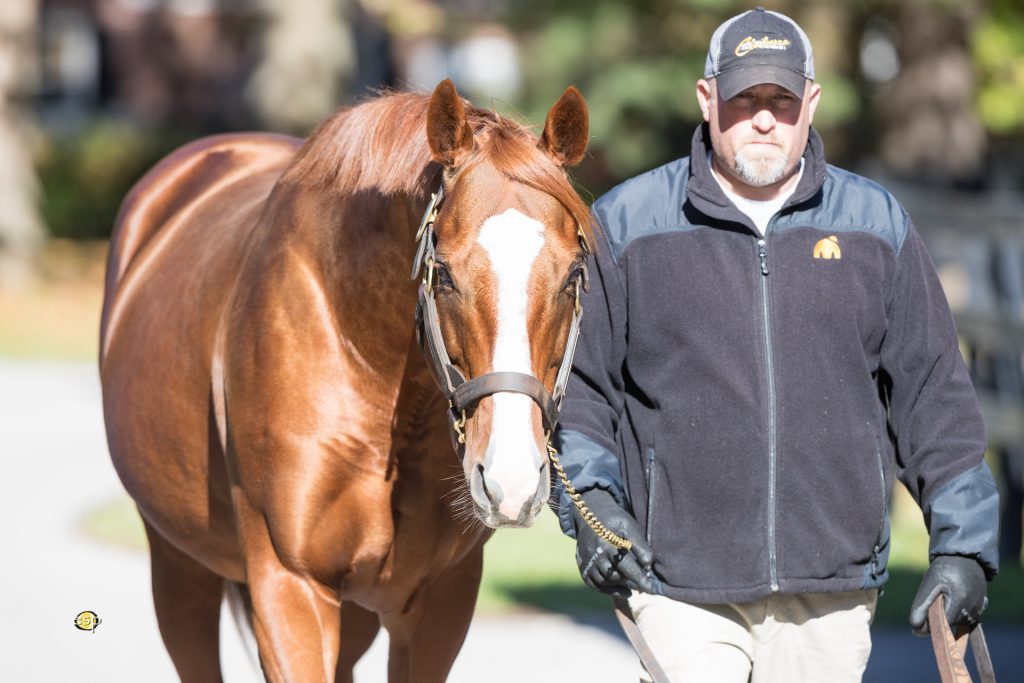 Lea with his groom Kevin Lay.

Here’s what Lea’s groom Kevin had to say about the chestnut stallion:

Tell us a little bit about Lea’s personality. Lea has a cool personality. I like to call him Elmo after Elmo’s world because he’s always so happy go lucky – not to mention he’s chestnut!

Does Lea have any quirks/funny habits? During tours when you let him stick his head out, he comes up like he’s King Kong and he’ll slap his foot against the ground as to almost demand a peppermint.

Do you have a favorite memory or story involving Lea? My favorite memory of Lea although he didn’t win was his second-place finish in the 2015 Breeders Cup Dirt Mile. He always ran his heart out.

Does Lea’s demeanor change much between the off season and breeding season? Lea mainly has the same demeanor throughout the season. As long as you give him a treat every once in a while he will be your best friend.