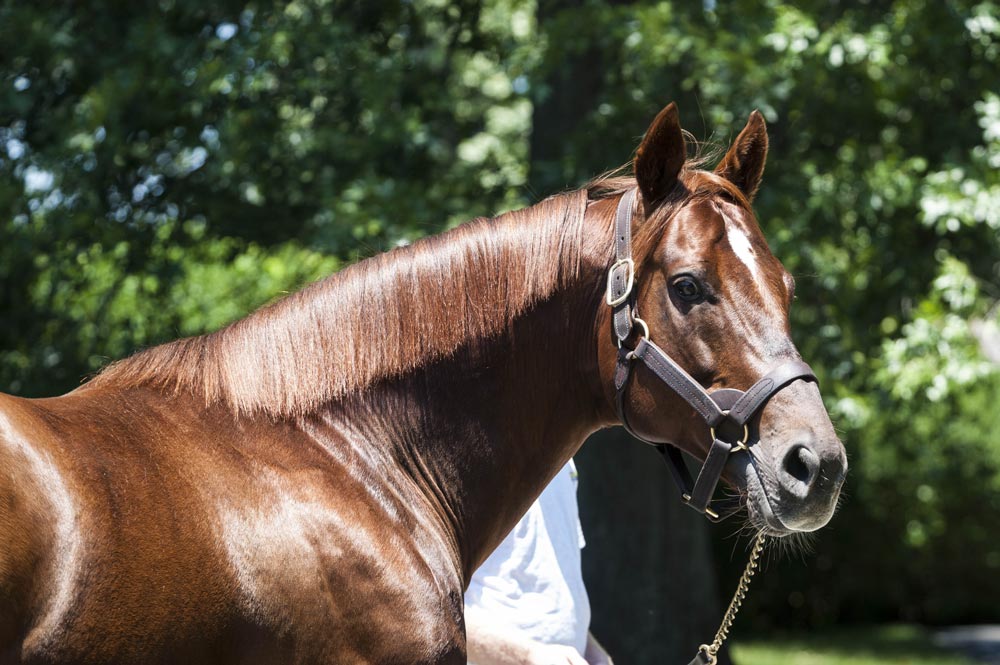 Breeding: First Samurai is by the legendary stallion Giant’s Causeway out of the Dixieland Band mare Freddie Frisson. His sire Giant’s Causeway was a wildly talented runner, undefeated at 2 and at 3 earned the nickname ‘The Iron Horse’ after he captured 5 consecutive group 1 stakes in England and Ireland over a span of just 11 weeks. First Samurai’s dam Freddie Frisson was herself a stakes winner and by a top broodmare sire in Dixieland Band. Dixieland Band ranked among the top 10 leading North American broodmare sires for 8 consecutive years prior to his death in 2010. Bred in Kentucky by John Gunther’s Glennwood Farm (also the breeder of 2018 Triple Crown winner Justify as well as 2018 St. James’s Palace winner Without Parole), First Samurai was offered at the 2004 Keeneland September yearling sale but was bought back for $380,000.

Race Record: Incredibly precocious, First Samurai broke his maiden impressively by 5 ½ lengths at first asking at Churchill Downs. After another Allowance score, First Samurai stepped straight into Grade 1 company at Saratoga in the Gr. 1 Hopeful Stakes and rewarded those confident in him by besting horses such as Henny Hughes and Too Much Bling by 4 ¼ lengths. He followed that win with yet another win in the Gr. 1 Champagne Stakes, taking his record to 4 for 4. First Samurai’s 2-year-old campaign closed with a 3rd place effort in the Gr. 1 Breeders’ Cup Juvenile at Belmont Park.

First Samurai returned as a 3-year-old to be second in the Gr. 2 Hutcheson and then tallied a win in the Gr. 2 Fountain of Youth, a Kentucky Derby prep race. In his final prep race prior to an expected start in the Kentucky Derby, First Samurai checked in 5th in the Gr. 1 Toyota Bluegrass Stakes at Keeneland. Upon evaluation after that Bluegrass, First Samurai was discovered to have fractured 2 ribs and was retired to Claiborne Farm as the first major son of Giant’s Causeway to stand at stud. First Samurai entered stud the same year as War Front, and joined the already elite stallion roster that at that time included Pulpit and Seeking the Gold.

Stud Career:   First Samurai entered stud in 2007 and stood his first season at a fee of $40,000. His first group of yearlings sold exceptionally well at public auction, fetching prices of up to $775,000. To date, First Samurai has sired 4 millionaires, 15 graded stakes winners and 26 stakes winners. His progeny includes the likes of G1SW and track record setting Lea, who stands alongside First Samurai here at Claiborne as well as G1SW and Spendthrift stallion Justin Phillip.

First Samurai is currently represented by Cutting Humor, a 3-year-old colt who won the Gr. 3 Sunland Derby to earn 50 points toward the 2019 Kentucky Derby!

Behind the Scenes: Here’s what First Samurai’s groom, Jon Niehaus, had to say about working with the son of Giant’s Causeway on a daily basis: