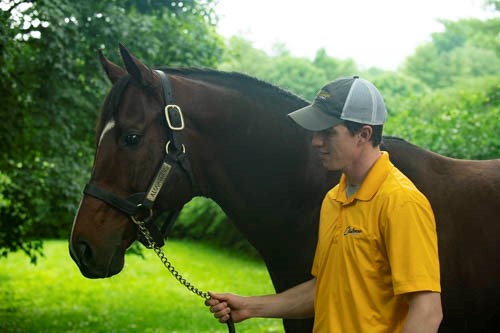 Breeding:  Bred in Kentucky by Oakbrook Farm, Algorithms is by the classic winning Bernardini out of the graded stakes-placed Ava Knowsthecode. A daughter of Cryptoclearance, Ava Knowsthecode parlayed her success at the track into a wildly success career as a broodmare. From 14 foals Ava Knowsthecode boasts 6 stakes winner, 5 of which are graded – Ava must know the code indeed! Among her progeny you will find not 1 but 3 active stallions in Justin Phillip (G1SW standing at Castleton Lyons), Greenpointcrusader (G1SW standing at Ocala Stud) and our own Algorithms. In addition, she is responsible for G1SPL and track record setter Keyed Entry as well as G3SW Successful Mission and stakes winning Alex’s Allure.

Offered as a yearling at the Keeneland September Sale in 2010, Algorithms was purchased by Starlight Partners for $170,000.

Race Record:  Campaigned by owner Starlight Racing and trained by Todd Pletcher during his racing career, Algorithms race record was a perfect 3 for 3. Algorithms broke his maiden as a 2-year-old at Belmont Park by 5 ¼ lengths. He followed that score with a win in allowance company at Gulfstream Park, giving his connections the confidence that the bay colt was ready for tougher competition. The colt was entered in the Gr. 3 Holy Bull Stakes at Gulfstream Park, a prep for the Gr. 2 Fountain of Youth Stakes and common route to the American Classics. Algorithms rewarded his connections with a 5-length victory over the eventual G1SW Hansen.

Slated to run in the Gr. 2 Fountain of Youths and installed as the morning line favorite, Algorithms was scratched the day of the race due to a splint on his right front leg. He was retired to Claiborne Farm for the 2013 breeding season.

Stud Career:   Algorithms entered stud in 2013 for a fee of $7,500. From 4 crops of racing age, Algorithms is responsible for 2 graded stakes winners, 7 stakes winners and 10 stakes placed horses. Among those horses are Recruiting Ready, a G3SW with current earnings over $650,000 bred by Claiborne Farm and campaigned by Sagamore Farm LLC. In 2019 Algorithms’ 2-year-olds have commanded up to $275,000 at public auction, and he remains ranked among the leading active sires by percentage of winner/starters lifetime.

Behind the Scenes: Here’s what Algorithms’ groom, Kyle, had to say about working with the bay stallion on a daily basis: