Claiborne Farm’s remarkable sire Pulpit passed away at the age of 18 in 2012, but his legacy as a sire continues to endure. The most recent evidence of Pulpit’s greatness can be seen in the older dirt male category for this year’s Eclipse Awards. Interestingly, the trio of finalists—California Chrome, Frosted and Lord Nelson—are all either sons or grandsons of this influential stallion. 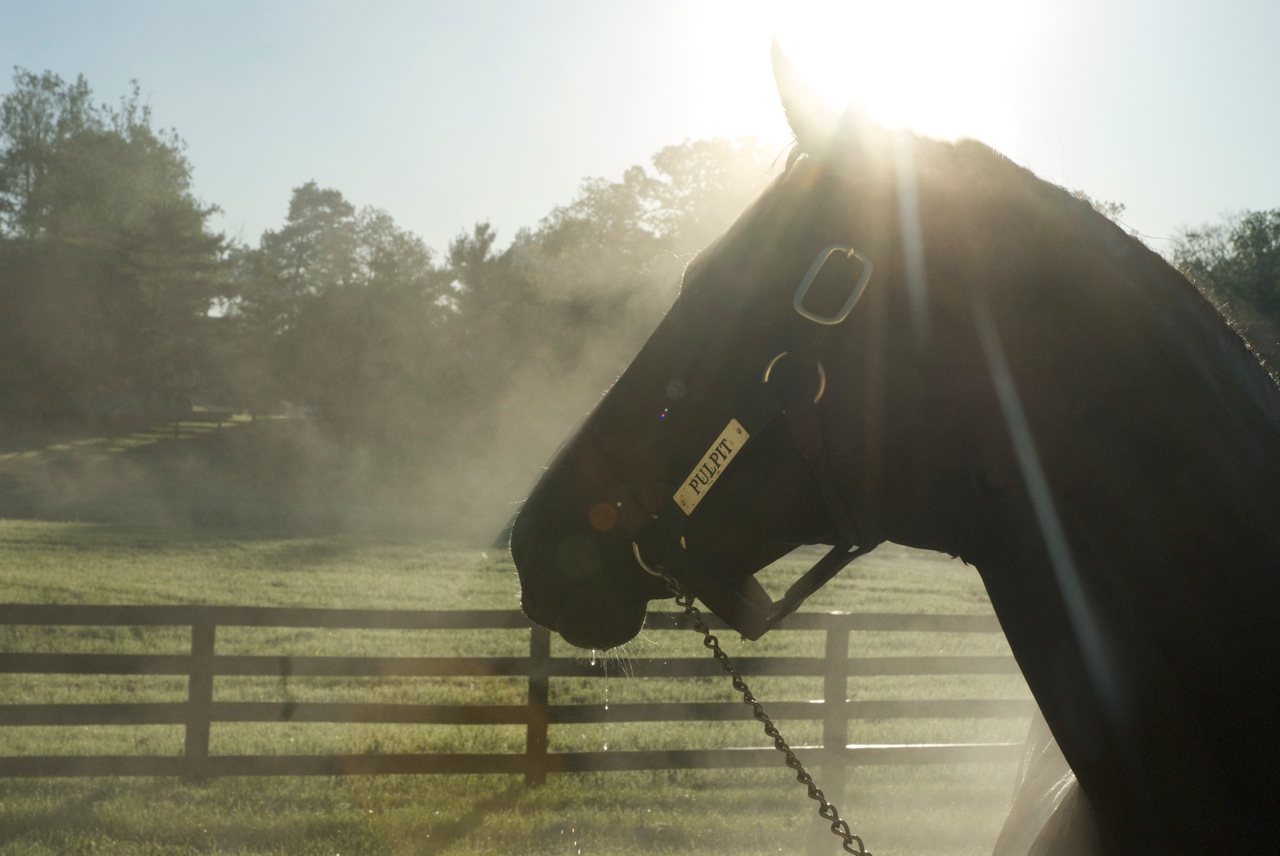 With 25 sons at stud internationally, Pulpit is carrying on the tradition of his sire line as a sire of sires. In 2016, his son Tapit was the leading North American sire by earnings for the third consecutive year, while Lucky Pulpit was ranked sixth. For three of the last five years, Pulpit’s sons Parading, Sightseeing and Corinthian have also ranked in the top 20 on their respective first-crop sire lists.

A son of A.P. Indy, Pulpit won four of six starts during his career while racing as a homebred for Claiborne, including the G2 Fountain of Youth Stakes and Blue Grass Stakes. He retired with earnings of $728,200.

Pulpit returned to his birthplace to begin his stallion career. He is the sire of 15 crops of racing age, 948 foals, 796 starters, 72 black-type winners, 1 champion, 584 winners of 1816 races and earnings of $76,700,042. Pulpit is the broodmare sire of 42 black-type winners, including champions Aces Star, The Mindfulangel, and of Due Diligence, Departing, Real Solution, Madefromlucky, Land Over Sea, Newsdad, Karlovy Vary, Storming Inti, Cage Fighter, Mi Suerte, The Great War, Rocket Time, Irish You Well.

California Chrome, by Pulpit’s son Lucky Pulpit, made headlines in 2014 when he captured both the G1 Kentucky Derby and Preakness Stakes. His status as a finalist in the dirt male and Horse of the Year categories was earned by virtue of victories in his first six races this year, including the G1 Dubai World Cup. In the G1 Breeders’ Cup Classic at Santa Anita Nov. 5, California Chrome lost by a half-length to Arrogate, who he will face in an highly anticipated rematch in the Pegasus World Cup Invitational Jan. 28.  Furthermore, California Chrome retires as the richest racehorse in history, with career earnings over $14.5 million.

Multiple graded stakes winner Frosted, another one of Pulpit’s grandsons, is by three-time North American leading sire Tapit. Frosted’s 2016 season was highlighted by a dominating 14 ¼-length score in the G1 Metropolitan Handicap, the largest margin of victory in the history of the race. Frosted also broke the Met Mile stakes record and was just two-fifths of a second off the track record with a final time of 1:32.73. The strapping gray retired in 2016 as Tapit’s richest son, with career earnings of nearly $4 million. He won six of 19 races, including this year’s G1 Whitney and Round 2 of the Maktoum Challenge at Meydan (G2); plus the G1 Wood Memorial and G2 Pennsylvania Derby in 2015.

Pulpit’s son Lord Nelson has carried on his sire’s legacy well with a perfect four-for-four record during his 4-year-old season, including three consecutive grade I victories: the Triple Bend, Bing Crosby and the Santa Anita Sprint Championship. The Bing Crosby was a record-setting performance, in which he won by four lengths and ran six furlongs in 1:07.65. The final time bettered a stakes record that had stood at Del Mar since 1962.

A stakes winner at 2, 3, and 4, Lord Nelson has finished first or second in seven of eight sprint starts, six of them in graded events, for career earnings of $958,271. For his 2016 efforts, he is an Eclipse Award finalist in both the male sprinter and older dirt male categories.

With so many accolades to Pulpit’s credit, including this year’s Eclipse Award dirt male finalists, this remarkable sire has cemented his place among Claiborne Farm’s long list of breed-shaping stallions.