American Patriot became the first G1 winner of 2017 for War Front when the 4-year-old colt scored a heart-pounding neck victory in the Makers 46 Mile at Keeneland April 14. 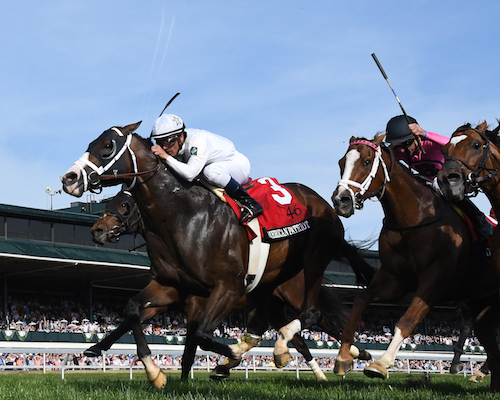 Trained by Todd Pletcher for owner/breeder WinStar Farm, American Patriot outlasted Heart to Heart in the final strides of the $300,000 contest under jockey Javier Castellano. The final time for the mile on firm turf was 1:34.70.

“We always felt like he had a lot of potential,” Pletcher said. “He was unlucky to not win a Grade 1 last year. He’s trained exceptionally well all winter (at Palm Beach Downs in Florida). He has run well at Keeneland before so we knew he would like the turf course.”

American Patriot came into the race off a Feb. 16 allowance victory going 1 1/16 miles on the Gulfstream Park turf. He has won or placed in eight of 11 career starts, including a victory in last year’s G3 Kent Stakes at Delaware Park, for earnings of $475,050.

“I think he’s a versatile horse,” Pletcher told The Blood-Horse. “He’s proven he can run effectively from a mile to a mile and three-sixteenths, and he might even handle a little more than that. I think everything’s in play for him. He’s got a great disposition and a great mind. We’ll see how he comes out of it, I’ll talk to the guys at WinStar and we’ll come up with a game plan, but we have high hopes he can continue on the roll he’s on.”

American Patriot is out of the Tiznow mare Life Well Lived, who is a full sister to G1 Dubai World Cup winner Well Armed.