FLATTER kicked off what could be a big few weeks when his son out of Co Cola was the seventh most expensive colt and the most expensive colt of his session at the OBS Spring Sale of 2-Year-Olds. The stallion’s result led a big sale for Claiborne sires. 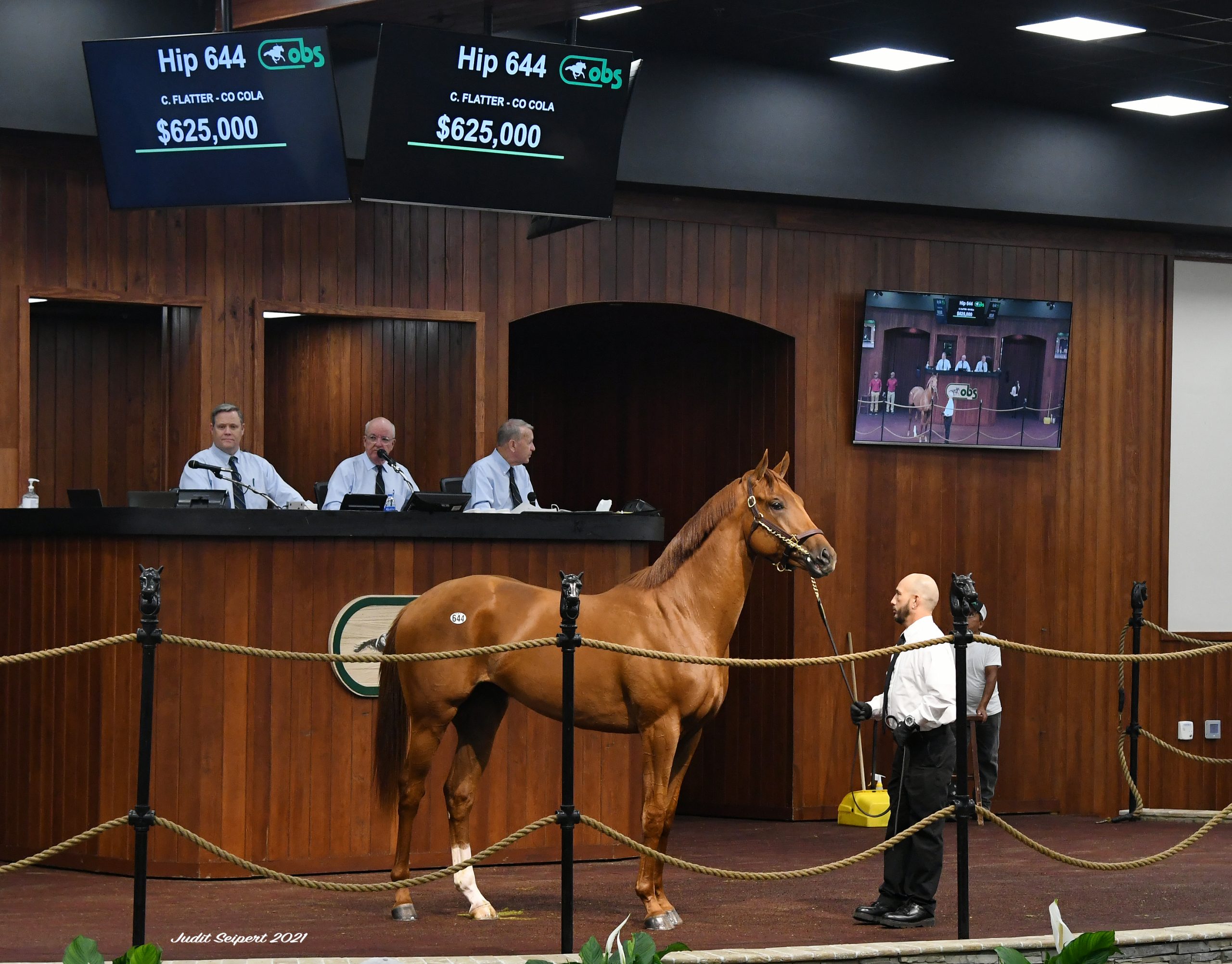 Also seeing his half-brother Blue Steel win his fifth career race only hours after he sold, this colt is out of the Grade 3-placed Co Cola, who is a half-sister to a Grade 1-placed runner. Also from the family of multiple Grade 1 winner Mind Your Biscuits, this colt’s dam returned to FLATTER earlier this week.

FIRST SAMURAI’s colt out of Fox Chapel caught the eye of Zilla Racing, whose agent Oracle Bloodstock purchased the colt for $200,000 from Grassroots Training and Sales.

The colt is the second for Fox Chapel, who is a half-sister to multiple stakes winner and Grade 2-placed Miss d’Oro.

The colt bred by Bullett Stables sees three of his first four dams producing stakes winners with champion My Juliet a half-sister to his fourth dam Princess Juliet, who is not only a stakes producer herself but also the dam of producers.

The Fox Chapel son was joined in the six-figure club by FIRST SAMURAI’s Hip 748, a $105,000 filly purchased by Price/Recio Bloodstock. Also offered by Grassroots Training & Sales, the filly bred by Milfer Farm saw a big update to her page after her consignor brought her as a yearling when dam E Moon’s half-brother Keepmeinmind won the Kentucky Jockey Club (G2) after placing in two Grade 1 races.

The two-time winning E Moon is also a full sister to Grade 2-placed In Jack’s Memory with their dam a half-sister to two stakes winners, led by Grade 3 winner and Grade 1-placed Mellow Fellow.

IRONICUS has proven to be a good stallion for D. J. Stable as the sire of their Tampa Bay Derby (G2) winner and Kentucky Derby (G1) contender Helium and they showed their faith again this sale when purchasing his only offering.

Signed for by Linda Rice as their agent, they paid $60,000 for a half-sister to multiple stakes placed Taoiseach. Offered by Niall Brennan Stables, it was the first time through the ring for the Stephanie Baltzan-bred filly.

MASTERY’s first crop continues to be a hot commodity and at OBS, he saw his son out of Clothes Fall Off bring $200,000 as the most expensive MASTERY of the sale.

That Wavertree Stables-offered colt is the first foal out of stakes winner and multiple Grade 2-placed Clothes Fall Off and was purchased by Brooke Hubbard as agent.

The Candy Meadows-bred’s dam is one of three stakes horses out of the stakes winning Tequilas Dayjur, who is also the dam of Grade 3-placed Strawberry Tequila and multiple stakes-placed One Last Shot.

Bred by Stonestreet Thoroughbreds, the May-born colt is a half-brother to multiple Grade 1 winner Secret Circle among three winners. Ragtime Hope herself was a multiple stakes winner, who is also a half-sister to Grade 3 winner and Kentucky Oaks (G1) third Really Polish. In all, this colt finds stakes horses under each of his first seven dams.