Blame had a huge day as a stallion when two of his offspring won graded stakes on opposite coasts Feb. 16. Blame’s 5-year-old daughter Marley’s Freedom notched her fifth graded stakes victory with an impressive win in the G2 Santa Monica Stakes at Santa Anita Park, while his 4-year-old daughter Blamed picked up her second graded score in the G3 Royal Delta Stakes at Gulfstream Park. 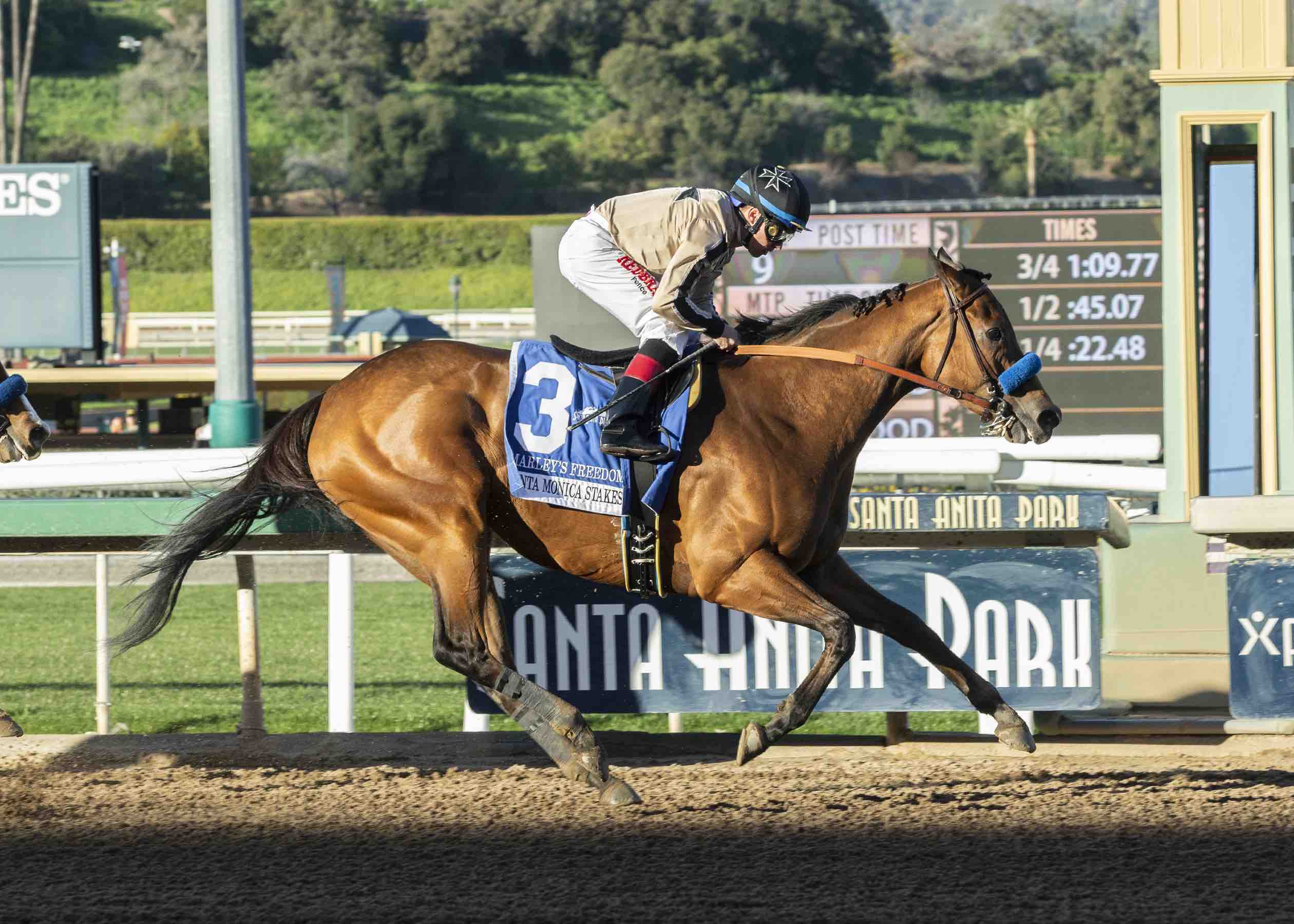 In the Santa Monica Stakes, heavily favored Marley’s Freedom pounced on defending winner Selcourt turning for home and won the race by by 1 ¼ lengths under jockey Drayden Van Dyke. Owned by Cicero Farms and trained by Bob Baffert, Marley’s Freedom covered seven furlongs over a “good” main track in 1:22.34.

Marley’s Freedom came into the race off a victory in the G3 Go For Wand Handicap at Aqueduct Dec. 1. She won four straight races, including the G1 Ballerina Stakes, prior to running a close fourth as the 4-5 favorite in the Grade I Breeders’ Cup Filly & Mare Sprint at Churchill Downs Nov. 3.

Out of the Formal Gold mare Relaxing Green, Marley’s Freedom has now won six out of her last seven starts. With the winner’s share of $120,000, she now has earnings of $935,935. Originally trained by Bob Hess, Jr., she’s made her last six starts for Baffert, and her overall mark now stands at 15-8-2-0.

“I’m proud of her and she always shows up,” said Baffert.

Meanwhile, in the Royal Delta at Gulfstream, Blamed opened up an easy lead that was never in jeopardy thereafter in the one-mile race. Sent to post as the 4-5 favorite, Blamed and jockey Irad Ortiz Jr. covered the distance in 1:35.18 to prevail by 1 ¼ lengths over Mexican star Jala Jala.

“It’s one of those things that’s really unique. She was a terrific filly,” said Ken McCarthy, longtime assistant to trainer Bill Mott. McCarthy was on Mott’s team during Royal Delta’s 2011, 2012 and 2013 championship seasons. “Just to have one in the race is special,” McCarthy added. “Then, to win it and be able to present ourselves with the trophy is even nicer.”

Blamed dominated the 3-year-old filly ranks in New Mexico last year before joining Mott’s stable and finishing second in the G2 Raven Run at Keeneland last October, followed by a victory in the G3 Comely at Aqueduct. She now boasts a record of 7-2-0 from 10 starts, for earnings of nearly $500,000.

Blame is the sire of 25 stakes winners. He had 15% stakes winners from starters in 2018, including other G1 winner Fault. Blamed stands for $30,000 at Claiborne.