Paris, KY – Claiborne Farm is proud to announce that millionaire Ironicus will retire from racing to join its stallion roster in 2017. 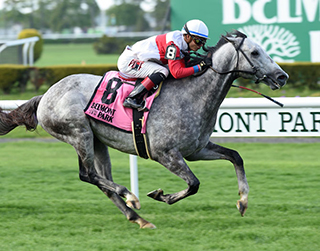 “This talented homebred had a solid race career as a three-time graded stakes winner and multiple grade I performer. We believe his accomplishments on the racetrack, as well as his impressive bloodlines make him an exciting stallion prospect,” Claiborne Farm representative Bernie Sams said of Ironicus, who is a half-brother to four graded stakes winners.

At 4, he captured the G2 Bernard Baruch Handicap in turf course record time at Saratoga. Ironicus recorded the fastest time in a quarter century in that race when he stopped the clock in 1:38.54 for 1 1/16 miles. Fourstardave held the previous record of 1:38.91 set July 29, 1991. In all seven of his Graded Stakes performances, Ironicus posted Triple Digit Beyer Speed Figures.

Ironicus also won the 2015 Grade 2 Longines Dixie Stakes over grade I winner and Canadian Horse of the Year Up With The Birds, and ran second in the G2 Fourstardave Handicap by a neck to Grade 1 winning millionaire Grand Arch. During his career, Ironicus defeated other grade I victors including Tourist, Constitution, Grand Arch, and Lochte.

Ironicus retires as the highest earner of 2016 for Distorted Humor and the 10th highest overall with $1,148,790. In 15 career starts, he was on the board 13 times with a record of six wins, six seconds and one third. He won or placed in six of seven graded stakes attempts.

“I think with his racing ability and pedigree, he is an outstanding value at $7,500,” said Hall of Fame trainer Shug McGaughey. “He always gave great effort and I enjoyed every morning I got to train him. He deserved to win a Grade 1 and certainly had the talent.”

Ironicus is out of the winning stakes-placed A.P. Indy mare Meghan’s Joy and is a half-brother to graded stakes winners Norumbega, On Leave, Hunting, and Quiet Harbor, as well as stakes winner Seal Cove, multiple graded stakes placed Minister’s Joy, and Silviculture, the dam of graded stakes winner and 3-time course record setter Onus. He will stand at Claiborne for $7,500 in 2017.

Ironicus is available for inspection by appointment.